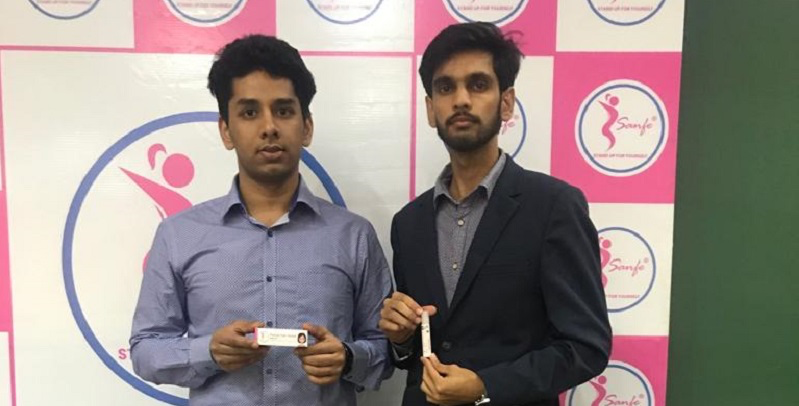 The essential oil-based roll-on is naturally formulated and has been medically tested and FDA approved. Sanfe Period Pain Relief Roll-On, available in 10 ml bottles, costs Rs 10 for a single use.

Sanfe was co-founded by Archit Agarwal and Harry Sehrawat, third year BTech students at IIT-Delhi. The roll-on was developed by them with the help of their professor, Dr Srinivasan Venkataraman.

“Women comprise 50 percent of our population and a significant portion of this population experiences pain and cramps during menstrual period. Therefore, this becomes an important problem to solve,” said Srinivasan, a Professor of the Department of Design.

Menstrual cramps often come in the way of women’s daily routine and companies have been developing feminine products to fight this. Brands, including Peesafe and Sensur, have also launched roll-ons to ease menstrual cramps.

Archit and Harry’s eureka moment was when one of their friends complained of not performing well in the semester exam, due to period pain.

“We realised that period pain forces over 40 percent of women to miss their daily routine. Motivated by this, we started working on a solution to relieve women from menstrual cramps,” the duo said.

They spent seven months on Research & Development. “We don’t want women to suffer because of a natural body function. We figured this problem and designed the roll-on,” said Archit, a BTech Textile Technology student.