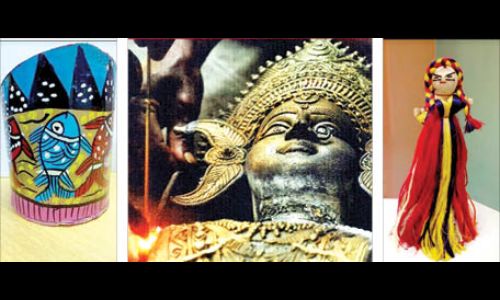 Kolkata: Around 60 artists, crafts persons and weavers from 17 districts of Bengal will take part in a three-day fair titled Lokshilpa O Karukriti mela, which will start from May 7.

It may be mentioned that after coming to power in 2011, Chief Minister Mamata Banerjee took up schemes to help the artisans. Their products are being exported through Biswa Bangla shops.

Around 2 lakh folk artists are receiving monthly stipend and are given programmes at cultural shows organised by different state government departments.

Melas are held throughout the year where the artisans can go and sell their products. Many Patchitris are invited to attend fairs held in European and other countries.

People from foreign countries are found to attend the melas that are held in different parts of Bengal.

The three-day fair will be inaugurated by Alokananda Roy while Sabyasachi Basu Ray Chaudhuri, vice chancellor of Rabindra Bharati University (RBU), will preside over the function. The mela will be organised by the West Bengal State Akademi of Dance Drama Music and Visual Arts of RBU.

Artisans from West Midnapore district will bring patachitras, mats, and decorative items made with buffalo horns and lac items from East Midnapore.

Clay dolls from south 24-Parganas and batik products from Birbhum and Howrah districts will be displayed at the mela. Wood carvings from Bardhaman district, dokra ornaments, shola handicrafts and kantha-stitch items from Birbhum district and traditional clay models from Nadia district will also be on display.

Shitalpatis from Cooch Behar, traditional Lepcha handicrafts from Kalimpong and wood carvings from Darjeeling district will be on display. The mela will remain open from 8am to 8pm.