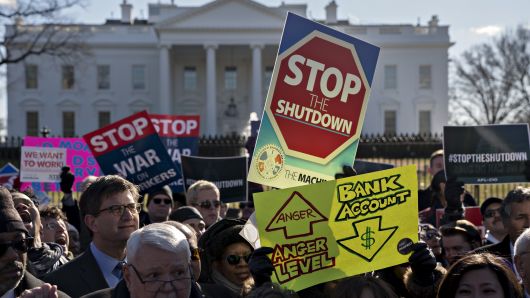 Andrew Harrer | Bloomberg | Getty Images
A demonstrator holds a ‘Stop The Shutdown’ sign during a rally with union members and federal employees to end the partial government shutdown outside the White House in Washington, D.C.

As a legion of heads of state and business leaders head to Davos for the annual World Economic Forum (WEF) next week, world affairs are as unpredictable and unstable as ever.

In the 12 months since the last forum, global trade relations and diplomacy as well as domestic politics have been fractious, to say the least.

Since President Donald Trump first announced tariffs on a selection of Chinese imports last January, the U.S. and China have gone on to impose tariffs of $250 billion and $110 billion on each other’s goods, respectively. Washington is currently witnessing its longest ever shutdown because of an impasse over funding for a border wall and Brexit remains as chaotic and unclear as ever just weeks before the U.K.’s departure from the EU.

The forum released a “Global Risks” report Wednesday in which it noted that “global risks are intensifying but the collective will to tackle them appears to be lacking.”

In continental Europe over the last year, we’ve seen a populist government take charge in one of Europe’s major economies, Italy, and a demise of mainstream politicians that could lead to a power vacuum — and moral crisis — in the region.

German Chancellor Angela Merkel announced in October that she is to retire from politics and her party continues to cede voters to the left and right, meanwhile an increasingly unpopular French President Emmanuel Macron is dealing with ongoing and often violent protests on the streets of Paris.

John Drzik, president of Global Risk and Digital at risk management firm Marsh, told CNBC that cybercrime, critical infrastructure and environmental threats, as well as changes in geopolitics, are among the biggest risks facing the world right now.

“The rise of nationalist agendas around the world is creating friction among states as well as weakening multilateral institutions,” he told CNBC’s Joumanna Bercetche.

“It’s not just in the U.S., here in the U.K. you have Brexit, but in Brazil, Italy, Austria and Hungary there are lots of populist political figures who are getting elected and changing the agenda to be more protectionist and more nationalist and, as a result, weakening the multilateral bonds that were there and that’s expected to continue into 2019.”

The global economy is not looking too great either as trade concerns continue to concern business and rattle financial markets.

The International Monetary Fund (IMF) cited trade tensions when it downgraded its global growth forecast for 2019 last October. The IMF expects global growth of 3.7 percent in 2019, down 0.2 percentage points from an earlier forecast in its World Economic Outlook report.

The World Bank, meanwhile, sees global growth at 2.9 percent in 2019 amid tightening financial conditions. The European Commission is also downbeat about the region’s growth, forecasting a lackluster 2 percent growth in the EU in 2019.

Against this backdrop, there’s plenty to talk about at this year’s Davos then when the heads and officials of over 100 governments meet, as well as top executives from over 1,000 global companies. Designed to foster private and public cooperation, the forum’s main objective is “to improve the state of the world.” This year’s theme is focused on “Globalization 4.0.”

WEF’s founder Klaus Schwab said in November that the world is experiencing “an economic and political upheaval that will not cease any time soon” adding in a WEF editorial that “the forces of the Fourth Industrial Revolution have ushered in a new economy and a new form of globalization.”

Schwab said that a slow and uneven recovery since the global financial crisis meant “a substantial part of society has become disaffected and embittered, not only with politics and politicians, but also with globalization and the entire economic system it underpins.”

We are underinvested in environmental infrastructure, expert says  52 Mins Ago | 03:09

He said populist discourse had confused globalization, which has been seen to have negative connotations in some populist narratives, with globalism.

“Globalization is a phenomenon driven by technology and the movement of ideas, people, and goods. Globalism is an ideology that prioritizes the neoliberal global order over national interests. Nobody can deny that we are living in a globalized world. But whether all of our policies should be ‘globalist’ is highly debatable.”

Put simply, Schwab said the challenge for global leaders is “to restore sovereignty in a world that requires cooperation.” He advised that rather than closing off economies through protectionism and nationalist
politics, a new social compact is needed between citizens and their leaders, so that everyone feels secure enough at home to remain open to the world at large.”

“Failing that, the ongoing disintegration of our social fabric could ultimately lead to the collapse of democracy,” he said.