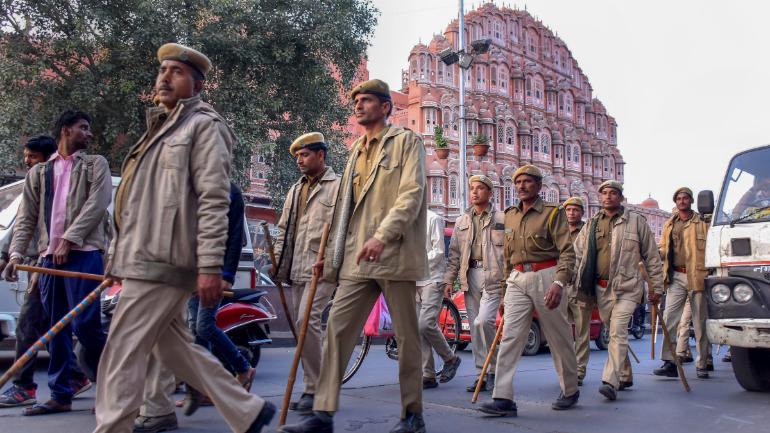 After high decibel campaign, Rajasthan, Telangana vote today: All you need to know Police personnel march in front of the Hawa Mahal ahead of Rajasthan Assembly elections, in Jaipur. (Photo: PTI)

After a high-voltage campaign that saw a fierce war of words among the Bharatiya Janata Party (BJP), Congress and other regional parties, voting in two of the most crucial states, Telangana and Rajasthan, has started Friday.

What is likely to throw some light on how the 2019 Lok Sabha elections would turn out, these state elections will set the stage for the mega battle next year.

As soon as polling ends on Friday, media outlets, including India Today TV, will announce their respective exit poll results.

In Telangana, more than 1.50 lakh polling officials, including reserve staff were seen giving final touches on Thursday to make the election to the 119-member House a smooth affair.

Over 2.80 crore electorate are eligible to exercise their franchise in the state, which has a total of 32,815 polling stations for the 119 stations.

Additional DG (law and order) Jitender told PTI on Thursday that about one lakh police personnel, including 25,000 central paramilitary forces and 20,000 from other states are engaged in poll duties.

A senior police official said security has been beefed up at bordering areas for the polling on Friday, which were identified as Left Wing Extremist-affected regions.

On Wednesday, Congress chief Rahul Gandhi, UPA chairperson Sonia Gandhi, Telangana CM K Chandrasekhar Rao and several others criss-crossed the entire state to give that final push to the campaign before the state votes on Friday.

While KCR was without doubt the star campaigner for TRS, the Congress and the BJP fielded their bigwigs for campaigning which turned out to be a shrill one. The assembly polls in Telangana were originally scheduled to be held simultaneously with the Lok Sabha elections next year, but the House was dissolved on September 6 as per a recommendation by the state cabinet.

It is to be seen if KCR’s gamble to opt for early elections pays off while the BJP and Congress have alleged that KCR feared loss if the elections were held simultaneously with the 2019 general elections.

The Congress has stitched the ‘Prajakutami’ (People’s Front) along with the Telugu Desam Party (TDP), the Telangana Jana Samiti (TJS) and the CPI to take on the ruling TRS, led by KCR.

The TRS, seeking a second term in office, is going alone, as also the BJP.

The BJP, which won five seats in alliance with the TDP in the last elections in 2014, said it ensured that there is a triangular fight in Telangana this time.

Polling will start at 7 am and end at 5 pm, while in 13 constituencies which were classified as Left Wing Extremist-affected, polling ends one hour before (4 pm).

As many as 1,821 candidates, including a transgender, are in the fray in the election.