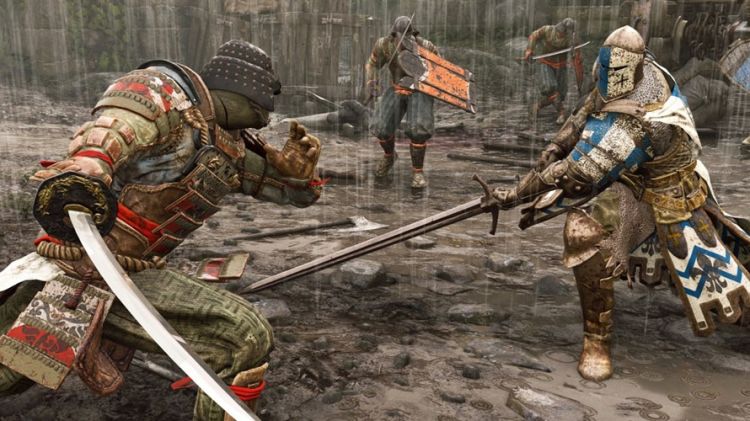 With Season Two of For Honor’s Faction War beginning tomorrow, Ubisoft implemented four distinct changes to gear. The developers aimed to reduce the gap between high and low level gear, have more stat varieties, show the actual stat values each piece carries, and introduce the Epic rarity sets. In addition, the costs to craft gear has been significantly reduced, though the salvage values after dismantling gear has been slightly reduced as well.

All of these gear changes will be available on Xbox One, PlayStation 4, and PC alongside For Honor Update 1.07, tomorrow on May 16.

When you have basic gear (gear score zero), you should still added bonuses:

For example: Weapon 1, 2, and 3 would be the blade, crossguard, and hilt, respectively.

Developer comments: We observed difficulties for certain players to play with new heroes without gear with the new gear values. To help this, default gear now has stats. To note, this does not apply when gear stats are disabled.

Once Update 1.07 arrives, you should be able to scavenge Epic gear post-match if you are at least Reputation level five.

Because of the new gear rarity, the scavenging rules have been tweaked:

Developer comments: To accommodate the addition of the new gear, we tweaked the way the gear is looted. To make sure the progression is comfortable, we reduced the amount of levels at which could be looted Rare and Heroic gear.

Gear Stats have been rearranged on all stats bundles and gear slots:

Developer comments: To support all our balancing changes, we removed, merged and moved stats to better focus on interesting and varied builds, with more meaningful choices.

Developer comments: Common gear wasn’t impacting the gameplay as much as we would have liked. With higher starting values, gear of all levels now feels more satisfying.

Developer comments: Players advising each other on gear strategies always said the same thing: Save your steel for Heroic gear. This means that many players saw very little gear progression until they got their first hero up to Reputation 3. Something that takes a long time. So by making the curve steeper at the low end and flatter at the top, we hope that players will see it as valuable to buy and craft gear of all rarities.

Developer comments: Players were hard pressed to even notice the effect of their penalties at anything but the highest gear levels. We hope that by increasing the size of the penalties and removing skills that are of limited use we’ll make all your future gear decisions that much more interesting.

Developer comments: We needed to offer a more moderate option for players regarding gear, for players that liked the initial balance of the hero and didn’t want to upset it with powerful bonuses and penalties.

Developer comments: While gauges are excellent at showing relative strengths and weaknesses of the gear, it was hard to decipher the impact they would have on the gameplay. To actually allow players to make meaningful choices and know the effect of their gear, we changed it to numbers.

Developer comments: To allow to choice gear at a glance and evaluate gear quality, we added arrows right of the gear stat values when comparing gear.

Developer comments: Having gear affect feats and bleed was both hard to understand and very powerful at higher levels.

Here are the new Salvage Material costs to improve gear:

Here are the new Steel costs to improve gear:

Here are the updated salvage values rewarded by dismantling gear:

Developer comments: Our data showed players had a hard time to level up new heroes and would not craft early gear as much while having an excess of crafting material at higher levels. To improve this, we changed the cost of steel and crafting material as well as salvage value for gear. We hope to offer a smoother curve while keeping higher level gear a long term goal for high level players.

All of For Honor’s gear changes and class changes in Update 1.07 will be available on Xbox One, PlayStation 4, and PC on May 16.

Get into our YouTube channel to find out which games are worth your money this month, including PREY and INJUSTICE 2.