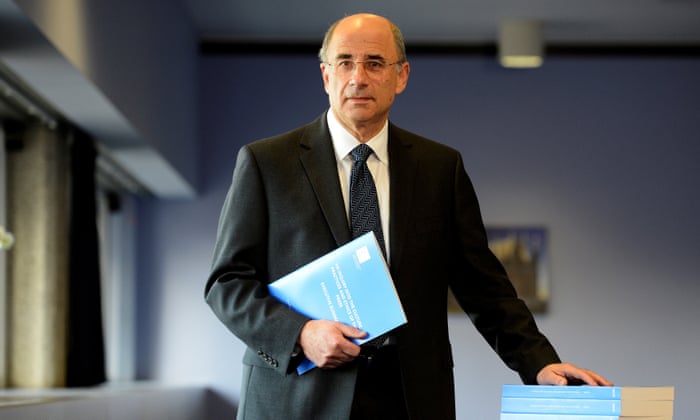 Brian Leveson wrote to the government earlier this year insisting the second phase of his inquiry should be ‘commenced as soon as possible’. Photograph: Paul Hackett/Reuters

The government has narrowly defeated a Labour bid to force it to launch the second phase of the Leveson inquiry into press behaviour.

MPs were voting on an amendment to the data protection bill tabled by the former Labour leader Ed Miliband. The government won the vote by 304 votes to 295, a majority of nine.

The Conservative manifesto for last year’s general election said Theresa May’s government would not proceed with the second stage of Leveson. During a two-hour debate on Wednesday, the culture secretary, Matt Hancock, said it would be the wrong way of tackling the most pressing questions facing the media industry.

He praised the low-cost arbitration system for victims of press intrusion set up by the Independent Press Standards Organisation). Ipso is voluntary, and not officially recognised.

Sir Brian Leveson was appointed in July 2011 in the wake of the phone-hacking scandal that led to the closure of the News of the World, and spent many months examining witnesses, ultimately reporting in November 2012.

When the inquiry was launched, a second phase was envisaged, which would cover cases under criminal investigation when phase one was carried out. Leveson wrote to the government earlier this year insisting he believed the second phase of his inquiry should be “commenced as soon as possible”. Ed Miliband attacks government’s axing of new Leveson inquiry – video

The shadow media secretary, Tom Watson, opted not to press for a vote on a separate amendment he had tabled, aimed at forcing the government to trigger section 40 of the Crime and Courts Act of 2013.

Passed in the wake of Leveson, section 40 would impose punitive legal costs on English media organisations that refused to sign up to an officially recognised press regulator. At present, the only such regulator is Impress.

Hancock robustly rejected the idea of implementing section 40, warning that it would accelerate the decline of local newspapers and undermine investigative reporting.

Allies of Watson said he had dropped his bid to force a vote on the issue when it became clear that the SNP would abstain – but some Labour MPs had also expressed concerns.

Miliband, who tabled the Leveson 2 amendment, gave an angry speech, accusing the Conservatives of abandoning promises made to the victims of the phone-hacking scandal by him and his then fellow leaders, David Cameron and Nick Clegg.

“No ifs, no buts, no maybes. A clear promise. And a promise to victims of the press. And here we are today, and we have the government saying: ‘Let’s dump this promise, it’s too expensive, it’s a distraction.’ How dare they! How dare they, to the McCanns, the Dowlers, all those other victims … I say to members across the house, whatever party they are in, this is about our honour. This is a matter of honour about the promise we made,” he said.

“We said to them that this time it will be different, this time we won’t flinch, I promise you we will see this process through.”

Labour’s Liam Byrne said: “If we have learned one thing from the last 10 to 12 years, whether it is the expenses scandal, whether it is Hillsborough, whether it is Orgreave: it is never the right thing to look at a scandal and decide it is too expensive, or we’re too busy, to get to the bottom of what happened. And that is the core of the argument to let Brian Leveson finish his job.”

The veteran Tory MP Ken Clarke pointed out to Hancock that both of them had served in the previous Tory government, which promised to carry out Leveson 2. He accused his colleagues of “currying favour with newspaper proprietors and editors”.

“Why is he cancelling a previously promised inquiry? What on earth is the reason for stopping investigations into the kind of thing we are talking about? No one else would stop investigations like this into any other body in this country,” Clarke said.

Hancock insisted the Leveson inquiry had been a “thorough and diligent examination” of the activities of the press. “The inquiry was followed by three major police investigations leading to more than 40 convictions,” he said.

Hancock sparked anger on Labour benches by announcing that the government had ordered a review into the compliance of the media in Northern Ireland with new media rules, in an apparent concession to the DUP.

The government relies on the votes of the DUP’s MPs to secure a majority, and the DUP’s Ian Paisley described the review as “Leveson for Northern Ireland”.

Miliband asked: “Why can there be a Leveson for NI and not for the rest of the UK?”