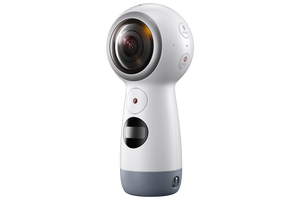 The electronics giant on Wednesday unveiled an updated version of its Gear 360 camera. The camera, which offers the ability to record content in 360 degrees, now supports 4K video resolution, Samsung (SSNLF, 0.00%)said on Wednesday. It also comes with a new design that could make it a bit easier to capture the camera’s entire surroundings.

The Gear 360, which comes with two 8.4-megapixel camera sensors, can be paired with a Gear 360 application that lets users remotely control the camera. It captures images and video of its surroundings and then stitches them together to create a complete “environment” that users can then share via Facebook (FB, +0.63%) and YouTube.

The Gear 360 stores content to a microSD card sold separately and can connect to the Internet over Wi-Fi. Samsung says it’s compatible with its new Galaxy S8 and Galaxy S8+, as well as most handsets running Android 5.0 or later. Any iPhone running iOS 10 or later is also compatible. The company’s Gear 360 is available to connect to Windows PCs and Macs on the desktop side.

Samsung didn’t say in a statement when the Gear 360 will launch and how much it’ll cost when it hits store shelves.

We’ve included affiliate links in this article. Click here to learn what those are.