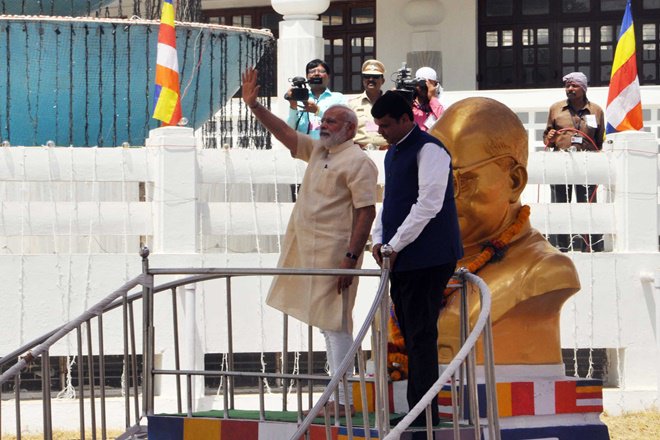 Prime Minister Narendra Modi today launched BHIM-Aadhaar platform for merchants. This biometric-based payment system makes paying with the help of thumb impression a reality, in Nagpur. On the occasion, PM Modi said that soon people’s mobile phone will become ATMs. “The day is not far when premises-less banking will become and reality and mobile phones will play the most crucial role in it.”

The launch of the biometric-based payment system on the occasion of the birth anniversary of the Father of Indian Constitution Dr Bhim Rao Ambedkar is expected to mark the start of a new transaction culture in the country. While launching the BHIM App, a digital payments app, on December 30, PM Modi had talked about the Aadhar Pay for the first time. “Download it (BHIM) on a smartphone or on a feature phone. It is not necessary to have the internet for this app. In the next two weeks, one more work is being done, which will increase the power of BHIM so much that you would be able to withdraw money even with your fingerprints,” PM Modi said at the event.

The BHIM-Aadhaar payment platform is expected to make digital payments easy even for people who cannot read or write. Moreover, it is expected to end people’s dependence on credit or debit cards and reduce cash transactions. In the start of this month, IDFC Bank had first launched the Aadhar Pay within its network.

Here are five things you should know about the Aadhaar Pay:

1. What is BHIM-Aadhaar payment platform, or Aadhaar Pay: Aadhaar Pay is the merchant version of the Aadhaar Enabled Payment System (AEPS). It will especially benefit those who do not have debit cards, mobile wallets and mobile phones.

2. Only merchants need to have Aadhaar Pay: Aadhaar Pay is an app that needs to be carried by the merchants only. Users just need to have an Aadhaar-linked bank account and mobile phone, credit or debit cards. Merchants can download the Aadhaar Pay app to take payments online from customer’s bank account to their own account using the 12-digit unique Aadhaar number of the clients where clients can choose any of their bank accounts to do the transactions.

Each transaction will be authenticated by the fingerprint of the customer. Transactions can be made through Aadhaar-linked bank accounts (AEBA) only.

3. How to use: Merchants can download the app from play store or iTunes. After that, they can login with their Aadhaar number using the fingerprint scanner. Once the app is validated, merchants can use it to take payments.

4. Security concerns: According to the Niti Aayog, the Aadhar Pay is a highly secure app which will use two main platforms – Aadhaar Payment Bridge (APB) and Aadhaar Enabled Payment System (AEPS). APB will act as repository between the banks and the customers to provide a smooth flow of transactions, while AEPS will help in authenticating the online process.

5. Customer benefits: Customers do not need a debit card or credit card for payments through Aadhaar Pay. Also, Aadhar Pay would end the need to have an internet connection, many payment apps, or POS machines.

Aadhaar Pay would not charge Merchant Discount Rate (MDR). MDR is the charge paid by the merchants to a bank merchant for accepting digital transactions through credit or debit cards.