US companies have 54% of IC market, says IC Insights 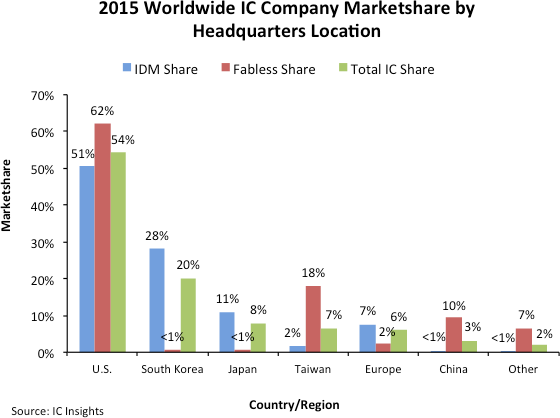 The total does not include foundry sales.

Korean and Japanese companies are extremely weak in the fabless IC segment with the Taiwanese and Chinese companies displaying a noticeable lack of presence in the IDM (i.e., companies with IC fabrication facilities) portion of the IC market. Overall, US-headquartered companies show the most balance with regard to IDM, fabless, and total IC industry marketshare.

At 62%, US companies held the dominant share of fabless IC sales last year, although this share was down from 69% in 2010. Since 2010, the largest increase in fabless IC marketshare has come from the Chinese suppliers, which held a 10% share last year as compared to only 5% in 2010.

INSIGHTS 201 $54 2 Companies 18 have 37 IC 1 Insights 157 Market 47 of 472 Says 129 US 71
Newer Post
INNOVATION INSIGHTS: Here’s an inside look at the platform that made Atlassian famous
Older Post
Telekom Romania financial insights