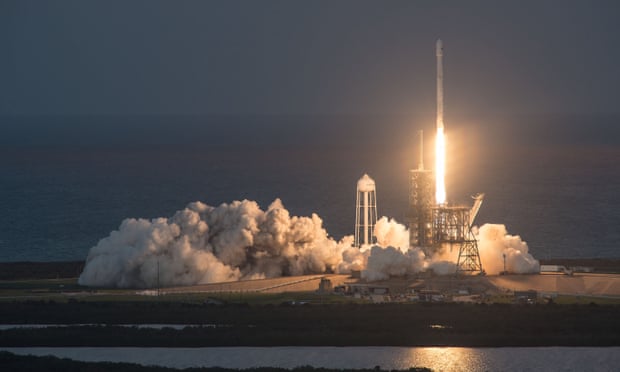 The SpaceX Falcon 9 lifting off in Florida on 11 October this year. Photograph: SpaceX/flickr

SpaceX set a brisk pace this week, with two successful launches of the Falcon 9 rocket. The second launch by the company – whose chief executive is its billionaire founder, Elon Musk – re-used a previously flown first stage booster, increasing confidence that SpaceX could deliver re-useable rockets and so drive down launch costs.

The first launch took place on 9 October. The rocket lifted off from the Vandenberg airforce base in California at 05:37 PDT (12:37 GMT). It placed 10 communications satellites in a 400-mile-high orbit for Iridium, the telecommunications company.

Iridium runs a constellation of telecommunications satellites. This launch is the first of eight launches scheduled that will place 75 satellites in orbit for the company.

On 11 October a second Falcon 9 rocket lifted off, this time from Kennedy Space Centre, in Florida. The launch took place at 18:53 EDT (22:53 GMT), and carried a larger communications satellite into orbit for SES and EchoStar.

This second launch was notable because it re-used a previously flown Falcon 9 first stage. This part of the rocket first launched last February when it boosted a Dragon cargo ship to the International Space Station; it then flew back and soft landed in Florida for re-use. This booster has now landed back on Earth again, several hundred miles from Cape Canaveral on a drone ship.

Reusing significant spacecraft components is the key to SpaceX’s business model of reducing launch costs. After each flight this week all the first stages returned safely to Earth.

These launches bring the total of SpaceX launches this year to 15, establishing the company as a leading player in the satellite launch market. In September, Musk declared his intention to use his rockets to colonise Mars.