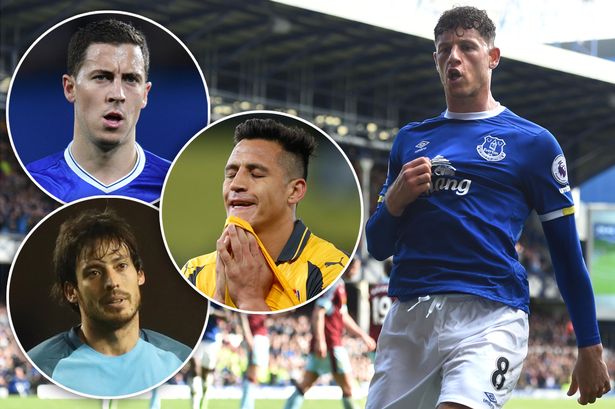 Ross Barkley has been more creative than Eden Hazard, David Silva and Alexis Sanchez this season Whatever your thoughts are on the PFA Team of the Year – and most of those thoughts might simply be “where’s Toby Alderweireld?” – you are bound to think that some players were unfortunate to miss out.

But one of those names probably isn’t Ross Barkley .

The Everton midfielder’s efforts over 2016/17 have pretty much mirrored those of his team . He’s occasionally been very good, but just seems to lack the consistency required to kick on and be considered among the very best.

Because a look at Opta’s chances created stats would suggest that Barkley has outperformed a number of the Premier League’s so-called brighter stars in one key area – his ability to create chances.

In fact, only Tottenham’s Christian Eriksen and Manchester City’s Kevin De Bruyne have created more than him in the division this season.

Chances created in the Premier League this season

So the Blues and sometime England midfielder sits above the likes of Eden Hazard, David Silva, Alexis Sanchez and Mesut Ozil, while Everton fans will be happy to see him above Liverpool duo Roberto Firmino and Philippe Coutinho, who sits 13th.

Enough to suggest that Barkley should have found a place in the Team of the Year?

Maybe not, but he’s certainly a much more intelligent player than some give him credit for…