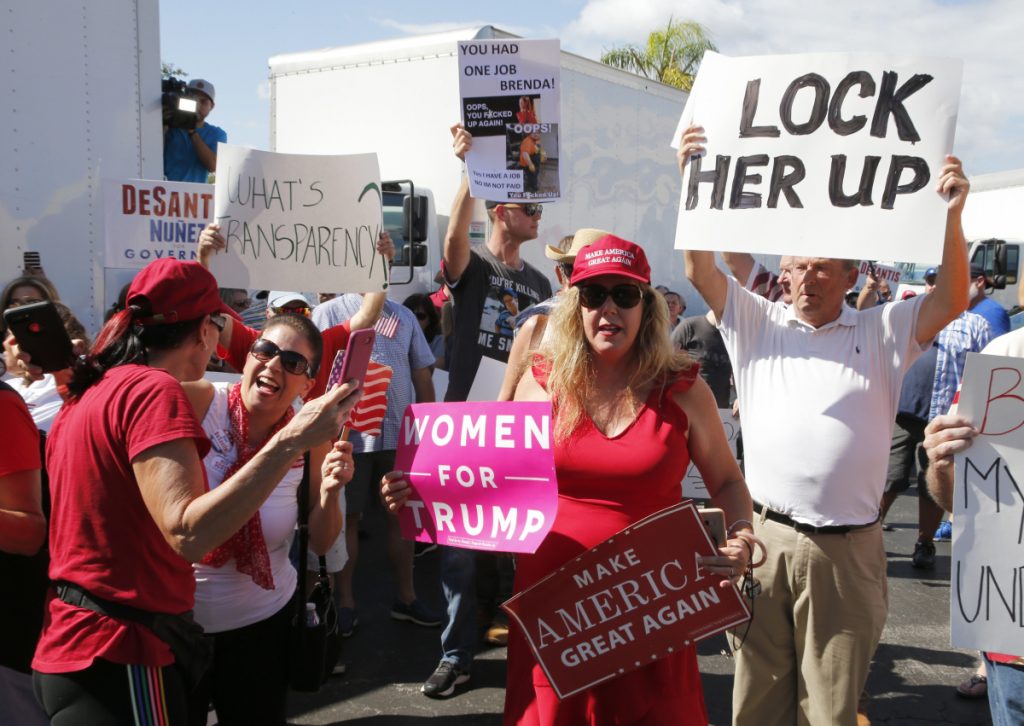 Parties gear up for Florida challenges The razor-thin Senate race in Florida erupted into outright partisan warfare Friday as Democrats pressed for a recount and Republicans – including President Trump – accused local election officials of tilting the outcome against them.

Republicans offered no evidence that fraud was to blame for a diminishing lead in heavily Democratic Broward County in South Florida, where the still-unfinished counting of absentee and provisional ballots has narrowed Republican Rick Scott’s statewide lead to less than one-half of a percentage point.

The margin is expected to trigger a recount of ballots, which could begin as early as Saturday in counties across the state. But it has also prompted an uproar from Republicans.

In addition, protesters took to the sidewalks outside the county’s election offices in Lauderhill to demand the ouster of Brenda Snipes, the supervisor of elections in Broward, who has faced a string of accusations over the last decade over mismanaged elections.

“It’s a mob scene,” said William Scherer, a Republican attorney representing Scott and who worked for George W. Bush in the recount during the 2000 presidential election. “This is like deja vu all over again.”

A lawyer for Democrat Bill Nelson, Marc Elias, said in a call with reporters Friday that the canvass underway in Broward and elsewhere in Florida is a “feature, not a flaw, of our democratic system” to be sure all valid votes are counted. He accused Republicans of falsely claiming voter fraud simply because the margin had changed.

“The lead is just over 15,000 votes now, which seemed to cause the governor to hold an impromptu news conference to acknowledge the shrinking state of the margin,” Elias said.

The Scott campaign lashed out at the suit. “Their desperation has driven them to ask the federal courts to allow voter fraud,” Scott campaign manager Jackie Schutz Zeckman said.

But reports have poured in from voters complaining that their ballots had been improperly rejected; one came from Patrick Murphy, the former Democratic congressman from Palm Beach who tweeted: “Just saw notice from @PBCounty that my absentee ballot wasn’t counted due to ‘invalid signature’ match. Should be +1 @NelsonForSenate @AndrewGillum. Must overhaul these ridiculous barriers to voting.”

In the Senate race, Scott had a lead over Nelson Friday afternoon of just more than 16,000 votes, or 0.19 percent, according to The Associated Press. In the governor’s race, Tallahassee Mayor Andrew Gillum, D, trailed former congressman Ron DeSantis, R, by more than 36,000 votes, or 0.45 percent.

Under Florida law, a statewide machine recount is conducted when the margin of victory is less than 0.5 percent.