One for the money: the great actors who slummed it in dumb movies 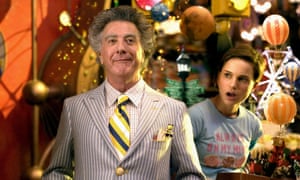 Helen Mirren’s appearance in Fast and Furious 8 – or Fate of the Furious, or whatever you want to call it – is notable for a couple of reasons. First, it proves that not even dames of the British empire are impervious to the breathlessly dumb spectacle of a big-budget, boneheaded franchise. Second, it elevates her to the highest possible rank of actor: Thespians Who Should Be Above This But Aren’t.

Almost without exception, every great actor has spent at least some time slumming it in films that don’t accommodate their talent. In fact, you could probably make a highly enjoyable movie marathon out of these appearances. Here’s my suggested running order:

We’ll start with perhaps the most infamous. By this point, Welles’s career had spiralled down to the extent that he was primarily famous for his angry, drunk, advert outtakes. His final indignity was playing a planet-eating robot called Unicron in a feature-length toy commercial. However, this raises an important point about slumming actors: although the work is beneath them, the films are often loads of fun to watch. Compare this with any of Michael Bay’s films, and Welles’s Transformers looks like a flat-out masterpiece.

Dench managed to win an Oscar after being in a film for just eight minutes. That film was not The Chronicles of Riddick, in which she played Dame Judi Dench Who Can Nearly Fly But Not Quite and Also Has a Curtain Over Her Head. It’s long, tedious and far too self-regarding for its own good. But, as Fifty Shades Darker ably demonstrated, at least Christian Grey was a fan of the film. He has a poster of it hanging on his wall.

A film so bad it became the punchline to Breaking Bad’s best joke, Mr Magorium’s Wonder Emporium is a prime example of all the bad things that can happen if you hire a renowned actor to star in your stupid movie. Hoffman endows his character with countless infuriating tics and quirks that would have almost definitely been beaten out of him if he wasn’t Dustin Hoffman. Future Oscar-winner Natalie Portman didn’t do herself any favours, either. Unbearable.

The stories about Marlon Brando’s antics on the set of this doomed HG Wells adaptation are much better than the actual film. It is said that, rather than learn the lines, Brando simply repeated whatever was dictated to him via an earpiece; a trick that went awry when the signal was highjacked by a nearby police scanner. He also insisted that his character should intermittently wear a bucket on his head and, although this was vetoed, that he should ultimately reveal himself to be a dolphin. The film is unwatchable.

Now it’s time for a twofer. This is the plot description from Virtuosity’s IMDb page: “When a virtual reality simulation created using the personalities of multiple serial killers manages to escape into the real world, an ex-cop is tasked with stopping its reign of terror.” The film, if you can believe it, doesn’t even live up to this. (NB: the film’s two leads have three Oscars between them.)

Michael Caine in Jaws: The Revenge

Caine’s “one for me, one for them” attitude towards filmmaking has resulted in a wildly spotty filmography. But his lowest point was the fourth Jaws movie. Roy Scheider’s character has died and his (possibly psychic) widow keeps getting chased about the place by an angry shark with a personal vendetta. Plus, said animal may or may not be controlled by a witch doctor. The film is partially redeemed by Caine’s devil-may-care attitude towards its horrible reception. “I have never seen the film, but by all accounts it was terrible,” he once memorably remarked. “However, I have seen the house that it built, and it is terrific.”

Supergirl is filled with weirdly mournful performances by actors who all seem fairly close to death – Peter Cook’s role is especially sad. And yet it is O’Toole who takes the biggest hit. Playing a Kryptonian trapped in the Phantom Zone (who nevertheless seems to have access to Bill Beaumont’s A Question of Sport sweater collection), he exudes the air of a trapped circus monkey who won’t get any dinner unless he turns up and goes through the motions. Heartbreaking.

Technically, Tender Loving Care might not count as a movie, as it never had a theatrical release, but it does stand out as a bizarre outlier on Hurt’s filmography. The film is an interactive Hand That Rocks the Cradle-style thriller with the thinnest possible erotic undertone. You watch a couple of scenes, then answer an on-screen questionnaire about how it made you feel. Your answers dictate where the film goes next. Hurt’s role was to guide viewers through these questionnaires, and then pull an interested face as they entered their answers. The role could easily have been taken by a monkey in a hat.

On the subject of monkeys, here’s a film about a crazy orangutan jewel thief and his kooky adventures in a negligently run hotel. You might remember Dunston Checks In as the film where an ape gives an erotic massage to a middle-aged lady. Or perhaps you’ll remember it as the film where the same monkey climbs on to a chandelier and flings himself at Faye Dunaway – star of Bonnie and Clyde, The Arrangement, Chinatown, The Thomas Crown Affair and Network – who then topples into a great big cake. This was probably less slummy for Dunaway than Supergirl (in which she also appeared) but, because she looks like she is having fun in this, it’s still worth throwing on the bonfire.

na Jones and the Kingdom of the Crystal Skull (2008)

No matter how prestigious their stage and screen careers, all actors want to work for Steven Spielberg. Even if they end up working with him on a film where people get attacked by giant ants. Even if that film has a sequence where the hero is catapulted to safety during a nuclear explosion by hiding in a fridge. Even if, at one point, Shia LaBeouf escapes death by literally swinging away through the trees like a monkey. This is why Cate Blanchett appeared in Indiana Jones and the Kingdom of the Crystal Skull.

At this point in his career, Hoffman was a true cinematic heavyweight. He had acted for Todd Solondz, Spike Lee and the Coen brothers. He was a favourite of Paul Thomas Anderson and Anthony Minghella. He had just won an Oscar for Capote. He could pick any role he liked, and he chose to be an anonymous baddie in the second-worst Mission: Impossible film. It made a small amount of sense, allowing him to chew scenery at full volume for his largest audience yet. But what a weird choice to play second fiddle to Tom Cruise’s frenzied running technique.

You could argue that Robert Downey Jr wasn’t slumming it by taking a reduced role in a fifth-rate Tim Allen movie. You could argue that, at this point in his life, he had scuppered his career so comprehensively that his appearance in this film counted as a kindness on Allen’s part. Even so, it’s jarring to see an actor so widely feted hopping around the interior of a courtroom on all fours with his tongue waggling around. Two years later, he would rehabilitate himself as Iron Man, becoming the world’s highest-paid actor in the process. But this performance remains a warning from history about all the bad things that can happen if you take too many drugs.

Let us finish our marathon with an undiluted cavalcade of slumming actors. Tiptoes should have benefited from its murderers’ row of talent. It stars two-time Emmy-winning Peter Dinklage. It stars two-time London Critics’ Circle award-winner Kate Beckinsale. It stars two-time Bafta-winner Gary Oldman. It stars Oscar, Bafta and Golden Globe-winning Patricia Arquette. It stars Matthew McConaughey, who won 18 awards in a single year for Dallas Buyers Club. Tiptoes should have been unstoppable. But it wasn’t because it was a weird hybrid of romcom and abortion drama in which Oldman played a dwarf. The whole thing was so offensive that it was never released theatrically in the US.