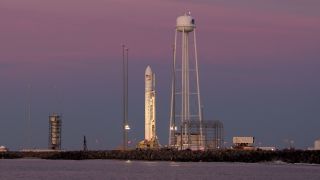 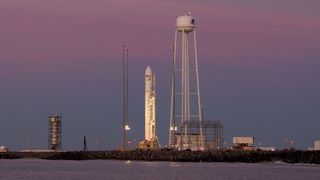 WALLOPS ISLAND, Va. — Northrop Grumman aborted the launch of a commercial Cygnus cargo ship to the International Space Station Sunday (Feb. 9) due to a sensor issue at the mission’s Virginia launchpad.

The Cygnus spacecraft, filled with NASA supplies, was set to launch atop an Antares rocket — also built by Northrop Grumman — at 5:44 p.m. EST (2244 GMT) from Pad-0A of the Mid-Atlantic Regional Spaceport here at NASA’s Wallops Flight Facility. But minutes before that liftoff, Northrop Grumman called of the launch try due to “off-nominal readings from a ground support sensor,” the company said in a statement.

NASA and Northrop Grumman are now targeting the launch for no earlier than Thursday, Feb. 13, at 4:05 p.m. EST (2105 GMT), weather permitting. There were launch opportunities on Monday, Tuesday and Wednesday, but Northrop Grumman opted to skip them “due to an unfavorable weather forecast over the next two days, and time required to address the ground support issue,” the company said.

The Cygnus spacecraft is packed with 7,600 lbs. (3,400 kilograms) of supplies for the three-person Expedition 62 crew living and working on the space station. The launch had a five-minute window and was aborted more than two minutes into that allotment. Northrop Grumman is still evaluating when to try again.

During the lead-up to launch, flight controllers paused the countdown at the T-5 minute mark for reasons that were not announced. The Northrop Grumman team then resumed the countdown, then pushed launch from an initial 5:39 p.m. EST target to its final 5:44 p.m. EST time — the end of the window — before scrubbing the launch try altogether. During live audio launch commentary, a mission team member referred to a regulator while discussing the abort, but more details were not yet available.

The technical glitch marred an otherwise flawless countdown for Northrop Grumman’s Antares and Cygnus vehicles. The launch had a 95% chance of good weather and that forecast appeared to be spot on.

Aside from a light breeze, the sky was a dusky blue, with wisps of clouds and flocks of geese decorating the sky from time to time.

As Northrop Grumman reviews Sunday’s Antares launch glitch, NASA and the European Space Agency are counting down to a different launch from Cape Canaveral Air Force Station in Florida.

A United Launch Alliance Atlas V rocket is set to launch the joint ESA-NASA Solar Orbiter mission from Cape Canaveral at 11:03 p.m. EST (0403 GMT Feb. 10) to begin an ambitious mission to the sun. The powerful Solar Orbiter is designed to study the sun’s polar regions from orbit to better understand the origins of solar weather and the sun’s magnetic field.