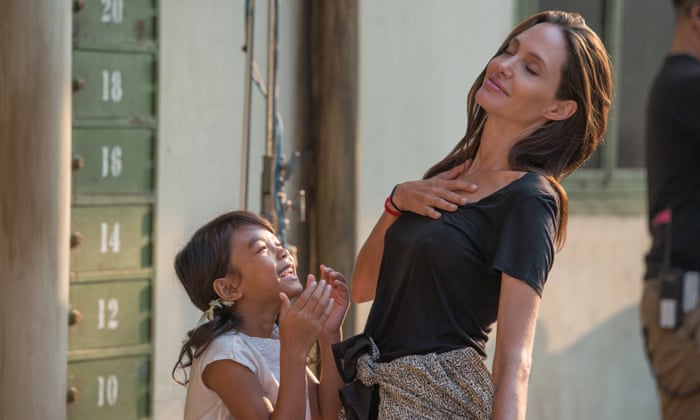 ‘Srey Moch [above, with Jolie] was the only child that stared at the money for a very, very long time,’ the US star, who directed First They Killed My Father, told Vanity Fair. Photograph: Roland Neveu/Netflix

A casting technique used in Angelina Jolie’s new film involved giving money to, then taking it away from an impoverished Cambodian child – who was awarded the part when she became “overwhelmed with emotion”.

Jolie, who is a goodwill ambassador for the UN Refugee Agency (UNHCR), recounted the method in an interview with Vanity Fair. Her made-for-Netflix film First They Killed My Father, tells the story of life under the regime of Cambodian dictator Pol Pot. According to the article, Jolie looked in “orphanages, circuses and slum schools” for children “who had experienced hardship” to audition for the role of Loung Ung, from whose memoir the film is adapted.

Evgenia Peretz, the article’s author, wrote that the casting directors then “set up a game, disturbing in its realism: they put money on the table and asked the child to think of something she needed the money for, and then [for the child] to snatch it away. The director would pretend to catch the child, and the child would have to come up with a lie.”

“Srey Moch [the girl ultimately chosen for the part] was the only child that stared at the money for a very, very long time,” Jolie told Peretz. “When she was forced to give it back, she became overwhelmed with emotion. All these different things came flooding back.”

“When she was asked later what the money was for, she said her grandfather had died, and they didn’t have enough money for a nice funeral,” Jolie added.

In the interview Jolie also revealed that she was diagnosed last year with Bell’s palsy, which causes temporary paralysis of the facial muscles. Jolie credits acupuncture for helping her to recover from the condition, which had caused one side of her face to droop. “Sometimes women in families put themselves last, until it manifests itself in their own health,” she said of the illness.

Jolie also discussed the surgery she underwent after learning that she had a gene mutation that increases her risk of developing breast and ovarian cancer. In 2013 the actor underwent a double mastectomy and reconstructive surgery and later wrote about the experience for the New York Times. She has since had her ovaries removed, a decision she says she made after blood tests indicated she might have cancer. When Jolie learnt that she didn’t have cancer, she says, “I dropped to my knees. I went into the actual [ovarian] surgery happy as they come. I was skipping. Because at that point it was just preventative,” she said.

First They Killed My Father will be shown at the Toronto international film festival, and is expected to be released later this year.