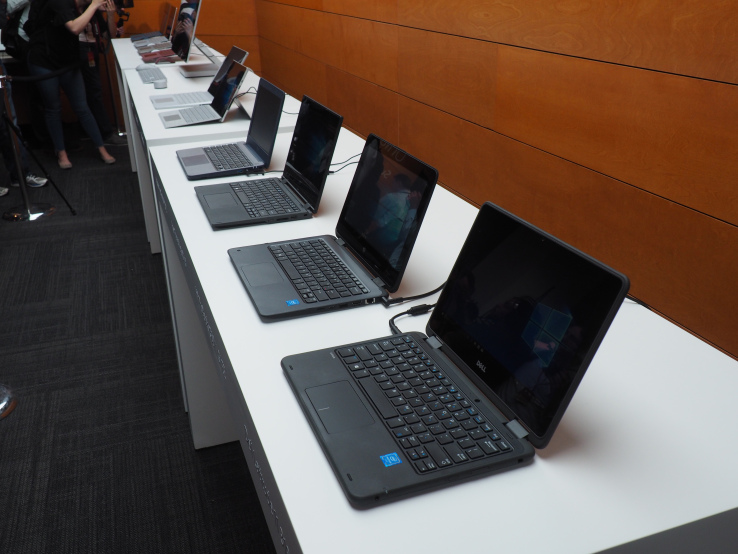 Microsoft’s new education push plays to its strengths, the cheap and familiar

Microsoft never mentioned Chromebook by name, but it’s clear that Google’s browser-based hardware offering was at the front of everyone’s mind at today’s education event in New York City. The company has managed to control much of the market internally, but the Chromebook has swiftly eroded marketshare here in the States.

Microsoft’s solution is playing into the company’s strengths of low cost hardware running familiar software. That’s precisely what Windows 10 S is all about. Unlike recentl education plays from the company that centered around the Surface, Microsoft has returned to its roots, focusing on what made it a hit during the rise of netbooks: the low barrier of entry.

The company’s focus on Surface in education was a rejection of that appeal. Microsoft clearly learned from the rise of the iPad in education that the best solution was a premium one, hoping the highest end experience would be a lasting one that students would take with them as they graduated and entered the real world.

That focus allowed Google to sneak in. Much maligned at launch, Chromebooks have ultimately proven a hit in education due in no small part to their extremely low barrier of entry, coupled with software features focused at the IT departments that make many of the purchasing decisions for schools and districts.

When the company announced Intune for Education paired with hardware systems starting at $189 back in January, it was clear that the company had learned its from its missteps. The percentage of schools that can afford a truly premium one-to-one hardware solution is limited to small private schools and the like. And those school often opt for the iPad for its premium hardware/software solution.

For everyone else, cost is paramount. Windows 10 S is an acknowledgement of this fact. Due out this summer on a slew of systems from hardware partners like Dell and HP, the streamlined OS plays into this, and by delivering a familiar software experience, it may well maintain some of the market abroad, as it delivers familiar productivity solutions like Office, coupled with new additions like mixed reality and 3D content creation.

And, of course, the company will be able to maintain a fuller offline experience than many Chromebooks, which are still largely browser based. With more complete offline functionality, these devices can help the company stay ahead in other parts of the world where school WiFi is a luxury, rather than a given.

Sure, Surface will continue to be part of the company’s solution in education. The company even used today’s event to announce a new device in that space. But if that system has success in education, it will be of the higher variety – high school, perhaps, but even more likely college.

If the company is really going to retain and regain classroom desk space, it’s going to do so with the simple, the familiar and the affordable.