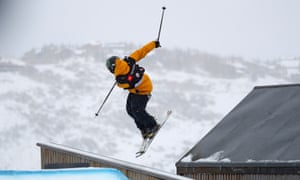 Great Britain’s James Woods has been crowned world champion for the first time after winning the men’s ski slopestyle competition in Utah.

Woods said: “It feels good. Obviously I couldn’t be more proud. I’ve put a lot of effort in over the years as everybody has.”

“It was a bit of a wild day to be honest with you,” Woods added. “We’re hanging off the side of a mountain here – judging the weather conditions, assessing the wind, knowing what the snow is doing. Today was a pretty close call whether it was going to be fair. I only care whether conditions are fair and everybody’s safe. I lucked out a little bit, but you’ve got to take it haven’t you?”

Woods had previously won a world silver medal in Voss in 2013 and bronze at Sierra Nevada in 2017. And victory was especially sweet for the Sheffield star who missed out on a Winter Olympic medal in Pyeongchang last year by just 1.2 points.

Woods had looked set to snatch a podium place in South Korea until Goepper edged him out with the final run of the competition.

Woods’s medal is Britain’s third of the championships after Charlotte Bankes and Izzy Atkin took silver and bronze in snowboard-cross and Ski Big Air, respectively.