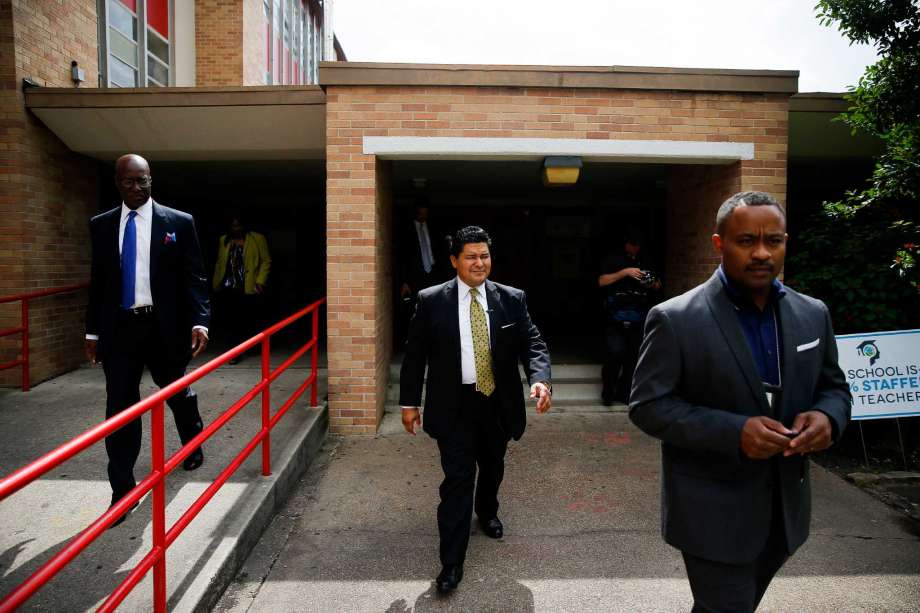 Superintendent Richard Carranza announced Thursday that the Houston Independent School District has decided to conduct a detailed review of the way that it serves students with disabilities.

The effort will include asking “independent, third-party experts to conduct a deep-dive analysis of our special education operation,” Carranza said.

The newly-hired superintendent announced the review in a statement, saying it would be the district’s “first order of business when the new year begins.”

“We will have a tough conversation about the importance of serving all children, regardless of any disability,” Carranza wrote. “Together, we will find solutions that serve our children because that is what Houston expects, and that is what Houston’s children deserve.”

The announcement came one day after the Houston Chronicle published a story detailing how Houston ISD has deliberately denied special education services to thousands of students with disabilities over the past decade.

The story, the latest in an investigation that has revealed a widespread denial of special education throughout Texas, quoted 41 current and former Houston ISD employers speaking about how they were pressured to keep special education numbers low. Many said they were ordered to shut out disabled kids in order to comply with district and state enrollment caps.

“We had long, agonizing meetings where we tried to push as many special ed students as we could into general education,” one retired teacher said.

Only 7.26 percent of Houston students receive special education, statistics show. That ranks 49th among the 50 biggest cities in America, ahead only of Dallas ISD.

The national average is 13 percent. The state average is 8.5 percent, due in part of a enrollment target of 8.5 percent that was put in place by the Texas Education Agency in 2004. Outside special education departments, the 8.5 percent target was unknown to parents, lawmakers, even many educators until the Chronicle investigation.

Also unknown until the Chronicle published its findings on Houston ISD earlier this week was that special education administrators here had set an even more restrictive internal enrollment target of 8 percent.

The story has sparked outrage across Houston. On Wednesday, Bob Sanborn, the president of Children at Risk, a prominent advocacy group, called for the immediate firing of Houston ISD special education director Sowmya Kumar.

In his statement, Carranza, who declined to comment ahead of the Chronicle story on Houston ISD, said he had seen “no evidence that such a cap drives these decisions in a systemic way.”

“But,” he said, “I understand that there are many stories that I have not heard.”

During the review, Carranza added, “we will not talk about arbitrary bureaucratic caps that could harm children.”

The Houston ISD review is the second such district effort initiated in response to the Chronicle investigation.

In September, Dallas ISD Superintendent Michael Hinojosa said he would conduct a six-month probe to find out why the district had such a low special education rate.

The U.S. Department of Education has also launched an investigation. In October, federal officials ordered the Texas Education Agency to end the 8.5 percent enrollment target unless it could prove that no disabled kids had been deprived of services. The TEA has since suspended the benchmark and said it would ultimately eliminate it.

Earlier this month, federal officials held public listening sessions throughout the state to help determine if further action was necessary. Nearly 1,000 people attended the sessions or have submitted comments online.

A report from the federal government is expected next month.

In September 2016, the Houston Chronicle requested an interview with the special education director of the Houston Independent School District, Sowmya Kumar, to discuss the large reduction in special education students in the district and the state. The audio is a portion of that interview, which Reporter Brian M. Rosenthal conducted with Kumar and HISD Communications Director Jason Spencer.
[“source-ndtv”]
EDUCATION 255 education 100 Houston 1 ISD 1 Its 119 operations 8 Review 233 Special 8 to 1217
Newer Post
Local education partnership names new executive director
Older Post
Our most popular education stories of 2016