Under pressure to stymie the spread of fake news, Facebook on Wednesday modified its system for showing trending topics.

The leading social network said that instead of simply showing a topic, it will include headlines from articles about the trending subjects along with sources publishing those stories.

“This was the most requested feature addition since the last update we made,” product management vice president Will Cathcart said in a blog post.

“These are the same headlines that appear when you hover over or click on a trending topic, but people told us they wanted these headlines directly within trending, too.”

The headlines that are shown will be automatically selected based on factors including how much people engage with the pieces and with the publisher overall, and whether other articles are linking to them. 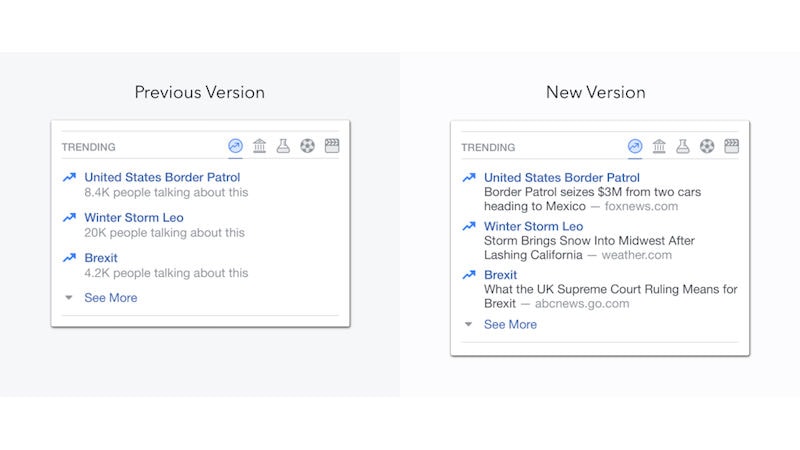 The update, which is being rolled out in the United States this week, also changes the way topics are identified as trending at Facebook.

Instead of measuring how many people are clicking on and sharing a single article, Facebook will take into account how many publishers are posting stories on the same topic and how much attention those pieces are getting.

Also, lists of topics will no longer be personalized based on individual interests and will be the same for everyone in a region.

“This is designed to help make sure people don’t miss important topics being discussed on Facebook that might not show up in their News Feed,” Cathcart said.

Facebook chief Mark Zuckerberg has sought to deflect criticism that the huge social network may have been used to fuel the spread of misinformation that impacted the 2016 US presidential race.

‘Tabloid cloakers’
Meanwhile Google on Wednesday said in a blog post that it took down 1.7 billion ads last year as part of its fight against “bad ads, sites, and scammers.”

The Internet giant noted the rise of “tabloid cloakers,” a scam that tries to trick people, and Google, by pretending to offer real news but instead taking people to promotional pages.

“Cloakers often take advantage of timely topics – a government election, trending news story or a popular celebrity – and their ads can look like headlines on a news website,” product management director Scott Spencer said in the post.

“But when people click on that story about Ellen DeGeneres and aliens, they go to a site selling weight loss products, not a news story.”

Google suspended more than 1,300 accounts last year for tabloid cloaking, according to Spencer.