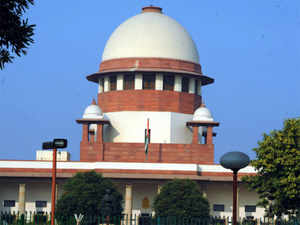 NEW DELHI: The Centre on Tuesday in the Supreme Court justified certification of Finance Bill, 2017 as a money bill saying it has provisions which deals with salaries and allowance to be paid to members of tribunals from the consolidated funds of India.

The top court reserved its verdict on a batch of pleas challenging the constitutional validity of Finance Act, 2017 on the ground that it was passed by the Parliament as a money bill.

The Centre contended that certification of Finance Act as money bill was done by speaker of Lok Sabha and court cannot judicially review the decision.

At the outset, Attorney General K K Venugopal, appearing for the Centre said that certification granted by the speaker cannot be challenged in the court of law.

The Attorney General justified before the bench also comprising Justices N V Ramana, D Y Chandrachud, Deepak Gupta and Sanjiv Khanna the certification of Finance Act as a money bill saying it deals with payment and receipt made from the consolidated funds of India.

He referred to provision for money spent on tribunals from the consolidated funds and said salaries and allowances of tribunal members would come under incidental matters referred in the Article 110 (1)(G) of the Constitution.

Article 110 of the Constitution deals with provisions as when can a Bill shall be deemed to be a Money Bill.

Venugopal relied on Aadhaar verdict of last year and said that the apex court has held that the main object of Aadhaar Act was to extend benefits to marginalised section of society in the form of aid, grant or subsidy from the consolidated fund.

Senior advocate Arvind Datar, who led the arguments for the petitioners, argued that a bill which says that salaries shall be paid to the members of tribunal does not in itself make it a money bill.

He sought making the tribunals independent saying their core judicial duty cannot be taken away or at least they can be brought under the control of law ministry or one nodal agency as held in 1997 and 2010 verdicts of the apex court.

The top court was hearing a batch of petitions challenging the Constitutional validity of the Finance Bill of 2017.

On March 28, the Centre has told the apex court that it cannot question the speaker’s decision of certifying a bill as a Money Bill and it is a well settled law.

Venugopal said contention that certification of Finance Bill of 2017 as Money Bill was not right cannot be a ground for a challenge to validity of the Bill.

He had said that apex court has repeatedly held in its verdicts that certification cannot be questioned and courts cannot inquire into the decision taken by Parliament.

Venugopal had said Finance Bill comprises of amendments to several Acts and statutes and the petitioners have challenged only one particular aspect saying it cannot be termed as Money Bill.

The apex court had earlier sought the Centre’s view on bringing all the tribunals under one central umbrella body for ensuring “efficient functioning” and “streamlining the working” of quasi-judicial bodies.

The top court had said it would not like to be bogged down with what is right or wrong and all it wants was that “the tribunals work efficiently and independently”.

The court had said it is tentatively of the view that directions given by the apex court in its two verdicts of 1997 and 2010 for bringing all the tribunals of the country under one nodal agency should have been “implemented long back”.