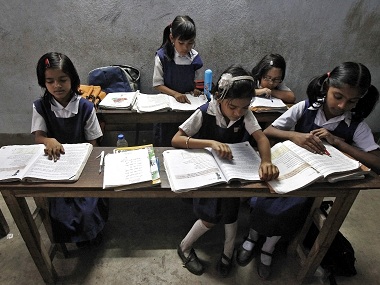 The budgetary allocation for the education sector, in terms of both magnitude of funds and the pattern of its utilisation, has significant bearing on improvement in quality of teaching, research and access to traditionally deprived groups.

The entire allocation of Rs 94,853 crore, with breakup for higher education getting Rs 38,317 crore and school education Rs 56,536 crore, indicates a nominal increase of nearly 10 percent, which may largely be absorbed for meeting expenditures on on-going activities.

This cess has been levied on income tax payers since 2004 to supplement the budget allocation to raise it to the level of 6 percent of gross domestic product to fulfill the oft-repeated government promises and meet the genuine requirements of education sector. Unfortunately, the central government is substituting regular budgetary outlays with this cess and a part of education cess is diverted elsewhere, as discussed below.

Evidence examined show that only about two-thirds of ‘education cess’ collected for school education is utilised for Sarva Shiksha Abhiyan, including mid-day meals. And, less than 8 percent of collection of cess for higher education and research is utilised for strengthening HEIs. Clearly, funds earmarked for development of education are deliberately diverted to other activities while aspects of widening the reach of education among deprived groups and improvement in quality of teaching and research are relegated to lower importance. The government plans to formulate a New Education Policy (NEP) with a view to reform the overall education system and overhaul the entire regulatory structures. There are, however, no indications as to how the government proposes to fill up vacant posts of teachers across the school to university education, provide teachers’ training and cope with skill deficits to improve earnings and employability of youth. These deficiencies are holding back transformation of education, which in turn impinges on economic growth.

While All India Status of Education Report (ASER) has demonstrated that learning attainments of school children are abysmally low, the finance minister has not made any specific mention of school education initiatives to improve quality of education, reduce dropouts, especially among poor and rural communities.

For instance, allocation for teachers’ training and adult education has been downsized to Rs 125 crore from Rs 871 crore in the last year’s budget, which does not augur well for schools’ improvement. Some of the important announcements made by the finance minister are briefly discussed below:

First, the National Research Foundation (NRF) to fund, coordinate and promote research and innovation will be established, for which allocation of Rs 608 crore has been made. It is not clear if NRF will be an overarching body to regulate activities of R&D organisations functioning under the auspices of CSIR, DRDO and other institutes of national importance. Or, it will be a standalone institution. The finance minister has not clearly articulated the policy that may lead to duplication of efforts and wastage of resources. This announcement has been made without necessary preparedness to design and implement the policy.

Second, a single higher education regulator, namely Higher Education Commission of India, is proposed to be established to replace over a dozen of regulatory authorities such as University Grants Commission, All India Council for Technical Education, Medical Council of India and many others. The idea of having a single regulator of HEI activities has been discussed in India for over two decades but it has not been operationalised for different academic and technical reasons. Is the government ready to undertake a major reform without having a detailed consultation with all the stakeholders, mainly the states and private sector operators?

Third, the idea of promoting ‘world class institutions’, for which Rs 400 crore has been allocated, is not new. Unfortunately, no worthwhile effort has been made to fill 30 to 50 percent faculty positions that are perpetually vacant for several years in almost all IITs/IIMs and central universities. And most self-financing institutions, which cater for over two-third of students in HEIs, have become commercial entities rather than institutions of excellence.

The budgetary outlays for IITs is Rs 6,410 crore, for IIMs Rs 445 crore and for IISERs Rs 899 crore, which are higher by 12 to 14 percent as compared to previous budget. These allocations are, however, not sufficient to recruit the required faculty. Shortage of faculty adversely affects both excellence in research and innovation as well as global ratings of HEIs, without which foreign students cannot be attracted to make India a higher education hub, as proposed by the finance minister.

Moreover, the much hyped PM fellowship scheme fund has been reduced from Rs 75 crore in 2018-19 to Rs 50 crore in this budget. Likewise, scholarships for poor minorities has been reduced. Clearly, the government has missed the opportunity of improving academic outcomes of deserving students.

Fourth, the finance minister mentioned an increased focus on ‘new age skills’ such as artificial intelligence, big data, 3D printing and robotics, which offer new job opportunities in the knowledge economy but did not indicate how to contain disruptions in the jobs market due to automation and AIs.

Due to huge deficiency in skills development, the policy of strengthening education and employment connection should have been carefully calibrated and financial allocation should accordingly have been made to improve entrepreneurial capacities and employability of educated youth to effectively function in the modern economy.

Union Budget 2019 has thus not made necessary financial provisions for educational infrastructure, including competent faculty to assure quality and to establish centres of excellence for promoting research and innovations that are critical for ensuring competitiveness of Indian economy. The government has thus missed the opportunity of providing necessary stimulus for human capital formation and reaping the benefits of population dividend.