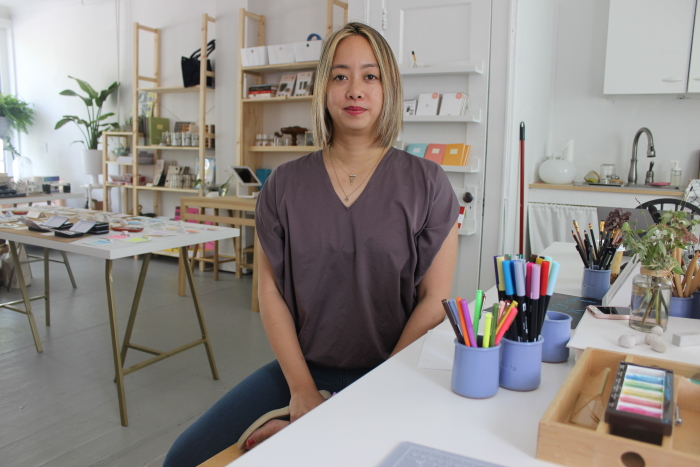 When Grace Lo finally made the move to Cold Spring in 2018 — after considering it for some time — she was struck by how many people she met who had a side project.

“It gave me permission to do that, too,” she says. The landscape architect, who grew up in Queens, had a good job but a hankering to live more of her life in a place where the outdoors is front and center — a place like Cold Spring, where she often came to hike.

A year later, fueled by meeting people in creative fields, particularly visual artists, she opened an arts way station on Main Street called Supplies for Creative Living. It will have its grand opening on Friday, Sept. 6. The storefront, next door to The Current’s office, is filled with supplies, books and products related to creative fulfillment.

“Here everyone seems invested in making a nice life for themselves and their families,” Lo says. “Though the last job I had was for an awesome, woman-owned firm, I had reached the point where I no longer wanted to expend energy working on something else for someone else.

“After moving from the city, you’re always waiting for ‘the catch,’ but there hasn’t been any, for me,” she adds. “I love the outdoors — there are, like, birds that I’m suddenly interested in identifying — and it’s also great being able to take the train into the city so easily.”

Lo continued working full time in New York City after her move, then “dropped it, taking time to figure out what to do next,” she recalls. “I did a lot of photography when I was younger, but I got into landscape architecture because you I thought you get to do creative things and be outside. In reality, you stare at a computer a lot. I missed the darkroom process, wondering what will show up. I stopped doing photography because of the digital switchover, and over time my other art fell by the wayside.”

After relocating to the Highlands, Lo found she had more time for her art and discovered “so many people talking about creativity, and cultivating it. I began trying to figure out how to make that imprint into a store. I’m still sorting it out, but actually since I decided to open, it’s all been evolving quickly. I thought it would take the whole summer to figure out, but people are excited and it’s moving along.”

With limited space, and a mandate to stick to “the components around creativity: how to start and how to keep yourself inspired,” Lo has focused on “having one great version of something, rather than overlapping too many versions of it.” Her store emphasizes drawing and watercolors, with a selection of pad, papers, pencils and brushes, along with pure pigments. For children and their parents there are art crayons “that blend nicely and clean off easily,” plus sewing and pencil and paper kits handmade in Woodstock.

Lo says she has been looking for products that are less widely distributed, “unique, sometimes handmade or vintage, touched and cared-for by others, rather than plastic.” She says she “started with my preferences for things, especially with watercolors. If you don’t have quality supplies, things get blotchy and weird and you think, I’m terrible at this, and it ends.”

The store offers workshops for children and for adults. “Living with such accessibility to nature makes for such a great environment to explore creativity and sense perception,” Lo says. “There’ll be seasonal themes, like looking for patterns that show up in leaves and flowers, with a late summer hike to gather flowers, then imprinting them on paper. Plus, we’re going to coordinate with Split Rock Books for an afternoon story time.”

Lo also hopes to have drop-in, informal, life drawing classes, some tailored to when commuters can make it and shift gears, such as weekend mornings. Inspired by The Endless Skein, another new store in town, Lo offers free, open-table sessions from 3 to 6 p.m. on Monday, Thursday and Friday designed to be a “hang out for those working on any creative endeavor, seeking company or just a change of scenery.”

She has been surprised by how many of her initial customers are locals. “I get hikers looking for sketchbooks, but I’m also getting lots of people in town who know what they want and need,” she says. “Others are interested but don’t know how to start. Children have come in and have paid me with their allowance money; lots of quarters. It’s adorable.”