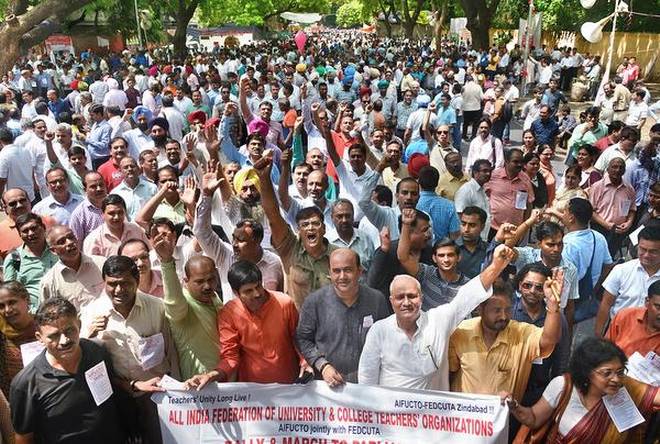 College and university teachers from across the country protested at Jantar Mantar on Monday, raising concerns over low budget allocation in the education sector.

The protest was organised by the All India Federation of University and College Teachers’ Organisations (AIFUCTO). Appealing to the Centre, the body demanded the implementation of the 7th UGC pay revision recommendations after consultation with it and other teachers’ bodies.

It also demanded the regularisation of temporary and contractual teachers, introduction of pay scales and service conditions for part-time and ad hoc teachers, and filling up of vacancies.

Members of the AIFUCTO also demanded scrapping of the Academic Performance Index (API) system, which was introduced by the University Grants Commission to assess teachers before their promotions are granted.

A statement issued by the AIFUCTO read, “All Central government employees, except university and college teachers, are getting their revised pay scales and allowances. Service conditions and terms of career advancement in the teaching profession are becoming stiffer by the day.”

Seeking immediate relief, the statement further read, “The time has come when, as educated minds of the society, we rise up against the autocratic and anti-teachers/anti-education activities of the government.”

The members also protested against the new pension scheme introduced for those appointed after 2004, which does not guarantee any clear amount to them after retirement.

The AIFUCTO also stated that there had been “blatant attempts to throttle the autonomy of higher education through excessive centralisation” under the garb of reforms.