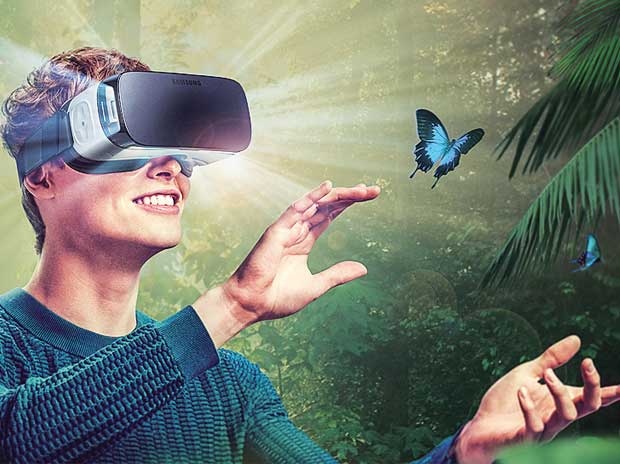 Samsung Gear VR: Reality if you have the right phone I’ve always wondered what it felt like to be Iron Man. Now, not only was I able to experience his suit boot up, I also got to meet JARVIS and play around with a few of Tony Stark’s toys. I wasn’t dreaming. This was reality, of the virtual kind – also called VR. Yes sir, I did all this sitting on my couch, using Samsung’s Gear VR headset, attached to a Galaxy Note 5.

At the time of writing, the Gear VR supported only four phones from Samsung – the Galaxy S6, S6 edge, S6 edge+ and the Galaxy Note 5.

My first attempt with the Gear VR presented me with blurry images, which I corrected using the focusing ring at the top of the headset. I don’t wear glasses and while the manual says one should use contacts if needed, I think the eye cups are big enough to accommodate medium-sized spectacles. Navigating is fairly easy; one needs to look at a certain item to point the pointer and then tap the select switch on the touchpad.

My first port of call was the videos already on offer – where I got to surf in Tahiti and visit the PGA Tour. There was some pixilation in the second video, but I blame it on the resolution of the screen; here was an instance where a 4K screen on a phone might make sense. Next, I downloaded Netflix in phone, not VR, mode. But I had to log into it in VR mode. I had a torrid time pirouetting my neck to type in my user name and password using the onscreen keyboard. Nothing matches the sheer pleasure of watching in a personal theatre, and the headphones add to the immersive experience. I decided to watch Gravity. But it was not to be; the built-in gyroscope ensured I was looking at the ceiling of the theatre after I lay down.

Next morning, with a fully charged phone, I decided to tackle an important aspect of the VR headset: gaming. I ended up playing Temple Run VR. It was fun playing it, but if one looked back, the monsters looked downright scary!

Samsung recommends a break after every 30 minutes of usage, especially if one feels discomfort. The phone heating up ensured I couldn’t continue for more than 45 minutes. And two hours of tinkering with the Gear VR depleted the Note 5’s fully charged battery down to 20 per cent – as the headset is powered by the phone.

The Samsung Gear VR, at Rs 8,200, takes multimedia and gaming experience to a whole new level but the phone heats up and the battery gets exhausted. It is possibly the best consumer VR headset one can buy in India at this price point, provided one has a compatible Samsung phone.