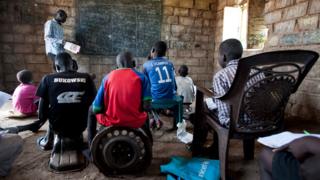 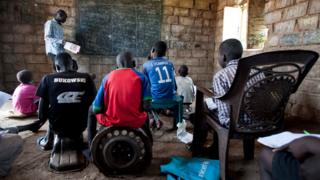 The UK’s overseas aid budget should target more of its funding towards education projects, says a cross-party committee of MPs.

The international development committee says the proportion spent on education should be lifted from 8% to 10%.

There are 250 million children around the world without access to school – and efforts to tackle this have been “shamefully underfunded”, say MPs.

The select committee says that the Department for International Development’s spending on education is £526m per year – less than on supporting health, civil society and intervention in disasters.

But the MPs say that in terms of long-term impact, investing in education will reap dividends in preventing conflict, improving life chances and improving economic development.

Mr Twigg says: “Education has been shamefully neglected by the international community and many national governments.”

The committee heard that there had been a “clear decline in international aid spending on education since 2011”.

“Even though we know the benefits of education, there is not enough funding from the international community to deliver this, particularly in the low-income countries which need most support,” said Mr Twigg.

Former Prime Minister, Gordon Brown, told the committee that such development funding suffered from being “short-term and unpredictable”.

“We cannot forever continue with this situation where the only way we fund humanitarian aid, whether it be for education, health, shelter or food, is through a begging bowl,” said Mr Brown.

Earlier this week, Unicef warned that warfare and conflict are preventing 25 million young people from getting any access to school, particularly in parts of sub-Saharan Africa.

In south Sudan, Unicef says almost three-quarters of primary-school-age children are missing out on education.

The international community set targets for universal primary education to be achieved by 2000 and then 2015, which, despite progress being made, were both missed.

The current target, part of the sustainable development goals, aims for this to be fully achieved by 2030.

However, Unesco, the UN agency that monitors global access to education, warned last autumn that, on current trends, the target was already unlikely to be achieved.

Figures from the OECD have shown that the UK is one of the biggest providers of international aid, both in cash terms and as a proportion of national wealth.

An analysis of international support for Syria’s refugees also showed that the UK was among the countries that had met their funding pledges, while a number of countries still had to deliver the aid they had announced.

A DFID spokesperson said the department was “proud to have supported over 11 million children in primary and lower secondary education from 2011-2015”.