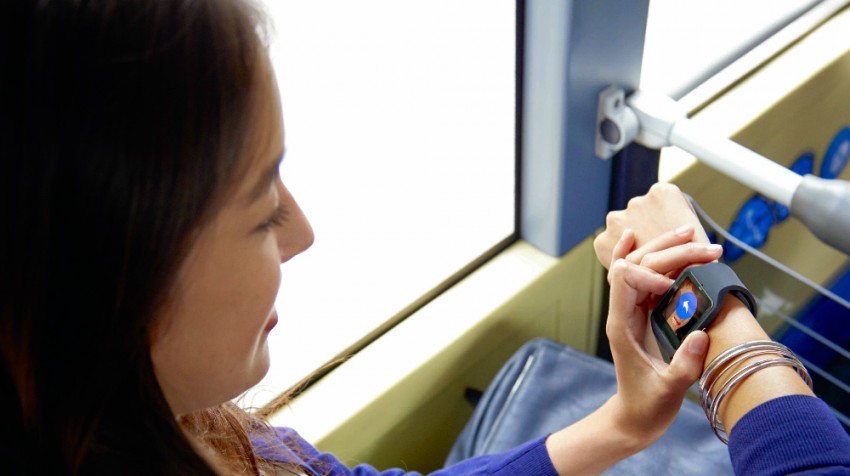 SmartWatch 3 will sync with any smartphone that’s running Android 4.3 or later. Sony says that the smartwatch is optimized for those devices, specifically. The SmartWatch 3 will send notifications of incoming calls, messages, and alerts.

The device has a 1.6-inch transflective display. The viewing area on the display measures 320 pixels square. Inside, the SmartWatch 3 has a Quad ARM A7, 1.2 Ghz processor with 512MB of RAM and 4GB of eMMC memory. This is to run apps specifically designed for Android Wear.

Sony says that SmartWatch 3 responds best to voice commands, though you can interact with the touchscreen or use gestures, too. The company says that voice commands can open apps or even send texts or other messages to contacts.

Sony’s other wearable offering doesn’t run Android Wear. In fact, SmartBand Talk only has a primitive-looking e-paper display. But this device does allow you to make or receive calls through a Bluetooth connection with your smartphone.

The e-paper display on the SmartBand Talk is just 1.4 inches and the watch, compared to SmartWatch 3, is considerably more slender. It’s less than 24-millimeters wide, according to Sony.

Despite those dimensions, it’s not short on functionality. In addition to its call capabilities, it receives voice commands that can operate your smartphone when it’s out of reach.

But here’s another feature busy users may find very helpful when organizing their lives. SmartBand Talk can also track your movement with an accelerometer and altimeter built-in to the device. These movements are then recorded in a Lifelog app, which helps you set and meet fitness goals and monitor your other physical activity.

Those tracking features are also present on the SmartWatch 3.

Kunimasa Suzuki, president and CEO of Sony Mobile Communications, says in a statement included with the official Sony release on the new products:

“Life is a journey, and journeys are made up of stories and experiences that define you – this is the underlying principle for Lifelog, the Android app at the heart of our SmartWear Experience. We’re going beyond mere fitness tracking and number crunching, to help you log and preserve those emotional moments that matter.”