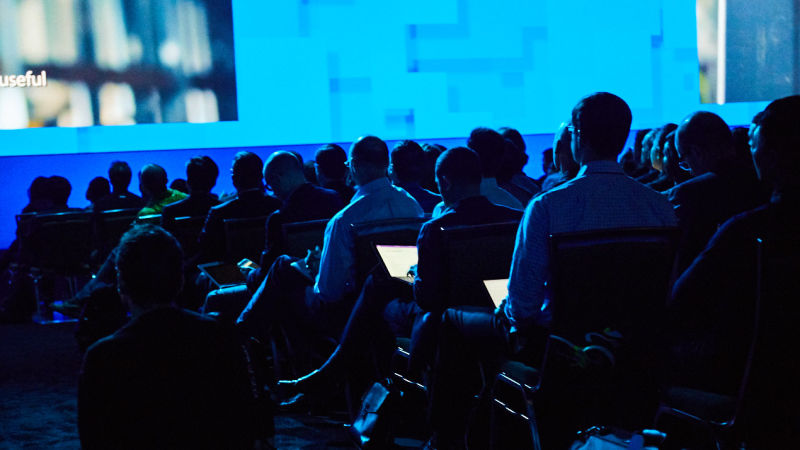 If you’re an employee under the heel of a giant corporation you should probably be terrified by the vision of the future of connected gadgets that Microsoft just revealed at its Build developer conference here in Seattle.

Two demos from today’s keynote stood out, both for being entertaining and for revealing a potentially frightening future for anyone working for a big employer with the will to micro-monitor its employees.

The first featured cameras watching employees on a construction worksite. The cameras are tied into the cloud, where artificial intelligence monitors everything in real time, noting identities of employees as well as identifying almost every single piece of equipment on the worksite.

That is undoubtedly cool, especially as the AI can instantly notice when someone is on the worksite that shouldn’t be, or identify when someone is using dangerous equipment in an ill-advised fashion.

It is also, you know, terrifying. Microsoft’s demo purposely focused on a construction worksite, where accidents are too common, and a smart AI overseer sort of makes sense. Spotting OSHA violations or trespassers quickly and then relaying that information to an employer via mobile notifications could genuinely save limbs and lives.

But my brain immediately started conjuring a scenario that was much more oppressive—One where these cameras were in some open office where people come to work in skirts or button downs from Dillard’s. Not a place where security or safety is a primary concern, but instead, a place where employers obsessively monitor employees in some misguided attempt to maximize profit by chewing up and spitting out the fleshy cogs in their machine.

With a surveillance system like this you couldn’t invite your friend to stop by for lunch because your boss would know, a notification instantly appearing on their phone. There’d be no long lunches or grabbing extra office supplies from the closet. Take a too smoke breaks or have a bout of indigestion that leaves you on the toilet longer than usual? The AI would be able to notice so quickly that your boss could meet you in the hallway with a bottle of Pepto Bismol.

The little bit of autonomy many employees still have in the office would be eradicated if this system were moved away from construction worksites and into more traditional offices.

This further illustrated by the other big demo of Build’s Day 1 Keynote. It focused on Cortana, and how it could now be everywhere, instead of just lashed to your laptop or phone. The demo shows a woman chatting with a Cortana-powered Invoke speaker in a set intended to represent her home. Then it reminded her she had a meeting, so she hopped in the car, where it promptly told her traffic was going to make her late and notified her workplace, then slotted her into a meeting already in progress.

This sounds wildly cool and convenient, but there was one thing Microsoft left unsaid. This woman was logged into her home and car with her workplace ID, which means potentially her employers could now have access to data from her home and car life. If work-life balance is of any concern to you, the fact that your home speaker system might one day tell you to hurry up and get to the office because you’re late and you’re chronically late should be alarming.

These demos illustrate the trade-offs inherent in a world in which we use more and more connected gadgets. You have to give up some of your privacy in order to reap the benefits of a network of devices tuned to you and your whims. But the realities of these trade-offs start to feel worse with Microsoft because despite its array of consumer products, like the Surface Pro and Microsoft 10 Home, Microsoft is in the business of working with businesses. Those are its primary clients, and it’s very much who Microsoft spent the majority of today’s keynote speaking to. You are not the business model, your company is. Asking consumers to give their data to a big faceless corporation like Google so it can sell ads is one thing—but asking them to also give all that data to the people who sign their checks is another.