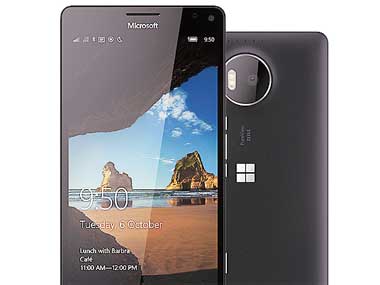 Windows-based phones have always failed to secure a place in the ongoing smartphone war. The inability to customise it (unlike Android phones) and poor hardware are some of the various things that have kept buyers at bay. But with the Lumia 950 XL, Microsoft is back with a bang.

Powered by the Windows 10 Mobile operating system, the 950 XL houses a fast processor, a great camera and a high-resolution display. Given the smartphones being launched nowadays, these specs are nothing new but what sets the 950 XL apart is its software and the attempt to integrate Windows-based devices. However, the design is too simplistic and looks like low-end Lumia phones. Considering its Rs 49,250 price tag, the phone in no way looks and feels like a premium one.

The 950 XL houses Qualcomm’s Snapdragon 810 processor with 3 GB of RAM. The phone performs well even during heavy usage. It didn’t buckle under the pressure I put it through by installing heavy games and apps. Of course, the downside is Windows-based operating systems don’t have a large variety available unlike Android smartphones. The phone’s battery backup is also quite decent. Armed with a 3,300 mAh battery, it can last almost a day with moderate usage.

The Continuum is an interesting feature in the phone. With a Microsoft display dock, a mouse and a keyboard, the phone doubles up as a Windows 10 desktop because of this feature.

The 20-megapixel (MP) primary camera is the show-stopper though. The “rich capture” mode is a delight and the output pictures have sharp colours, even in low-light conditions. The secondary 5MP camera is ideal for selfies.

Though, it houses a powerful processor, the 950XL fails when it comes to the app drawer. It is buggy and sometimes a reboot is required just to get something done.

The Lumia 950XL is not a bad phone, but it has a long way to go to leave a mark.