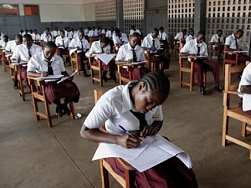 Liberia is a West African country that was settled by former American slaves at the start of the 19th century. For much of its independence, it had enjoyed relative stability and, in the mid-20th century, one of the fastest economic growth rates in the world. With the rise and fall of such grotesque dictators as Samuel Doe and Charles Taylor in the late 20th century, the country’s fortunes came tumbling down.

While democracy and stability have been largely restored, Liberia’s income per capita languishes below $1,000 per person per year. As such, it ranks as the 164th poorest country out of 169 countries surveyed. Concomitant with poverty and, until recently, chaos, is a ramshackle education system. While the data is scarce, only 42 percent of Liberians over the age of 15 knew how to read in 2007. The primary school enrollment rate was a paltry 38 percent in 2014.

As is common in much of Africa, the public education system is plagued by graft, poor quality and truancy on the part of both the students and teachers. The democratically-elected government of Ellen Johnson Sirleaf, a former World Bank official, has decided to try something new—outsourcing primary education to a private, for-profit firm, with student fees paid for by the taxpayer.

As my Cato colleague Neal McCluskey pointed out to me, the Liberian model is not school choice. Instead, the government has selected a private company to run some schools and that does not constitute a market.

Still, consider the apoplectic reaction of Kinshore Singh, the United Nations’ special rapporteur on education, who claimed Liberia was flirting with a “gross violation” of its obligation to educate children, and that Liberia’s plan was “devoid of any legal or moral justification.”

Speaking of morality, consider Mr. Singh’s employer—the United Nations. The United Nations Human Rights Council, for example, is an inter-governmental body responsible for promoting and protecting human rights around the world. Of its 47 members, Freedom House found, 11 were not politically free, 18 were partly free and only 18 were completely free. In 2016, the Council included such “defenders” of human rights as China, Cuba, Russia and Saudi Arabia.

In reality, the choice facing Liberia in the foreseeable future is not between good education provided by either the government or the private sector, but between bad government education and better private sector education. President Sirleaf’s cautious move toward limited privatization of education should be welcomed.

Countries of the World: Not Free, Partially Free, and Free