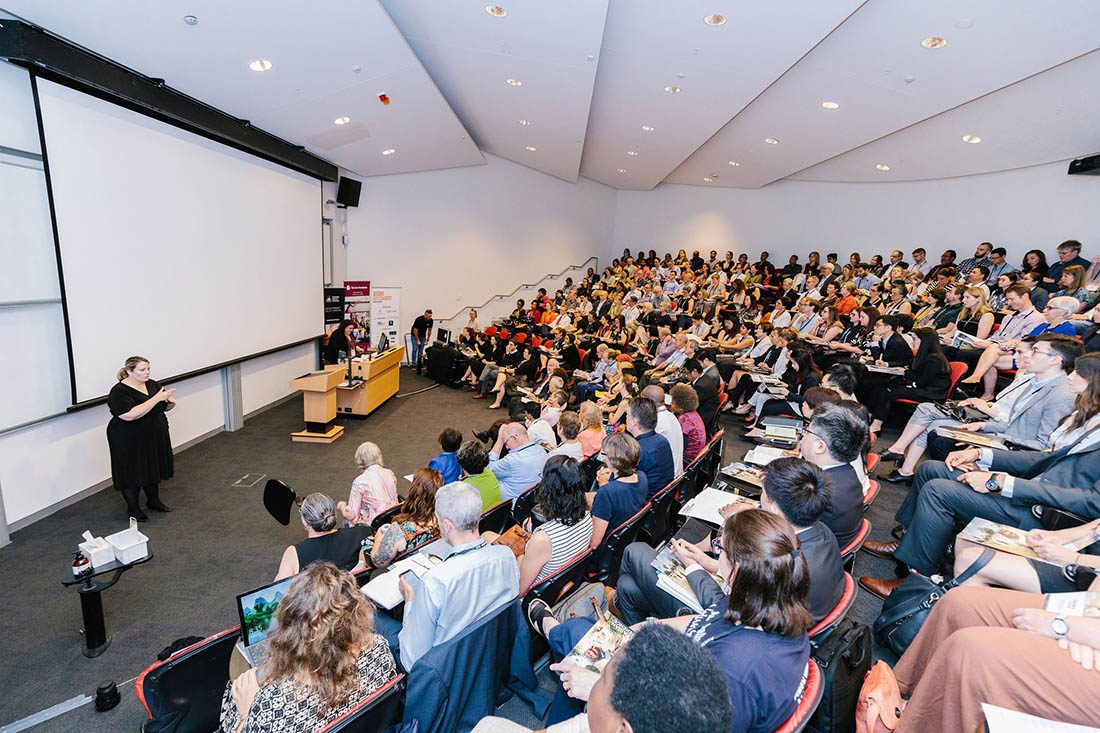 Insights from the Australasian AID Conference 2020

This year’s Australasian AID Conference, hosted by the Development Policy Centre of Australian National University and The Asia Foundation, coincided with Australia’s announced “refresh” of its framework for aid and international development (the “AID” in the conference name). Tension around the aid review centers not on the dollars to be spent (which are targeted to remain the same), but on the priorities, which are expected to narrow and be increasingly linked to Australian national interests. 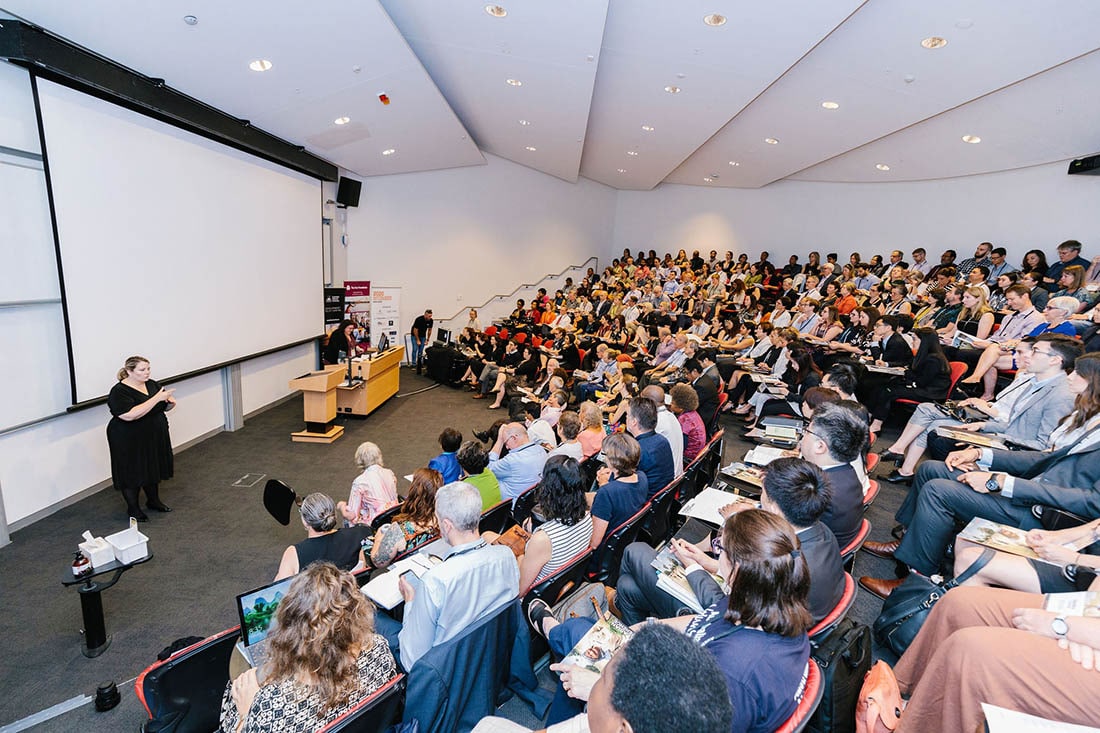 Fifty-eight panels and 220 presenters, many of whom have made submissions to DFAT for the aid-policy review, made solid cases for the future of international development cooperation. Here are a few of the more salient messages from speakers and participants: 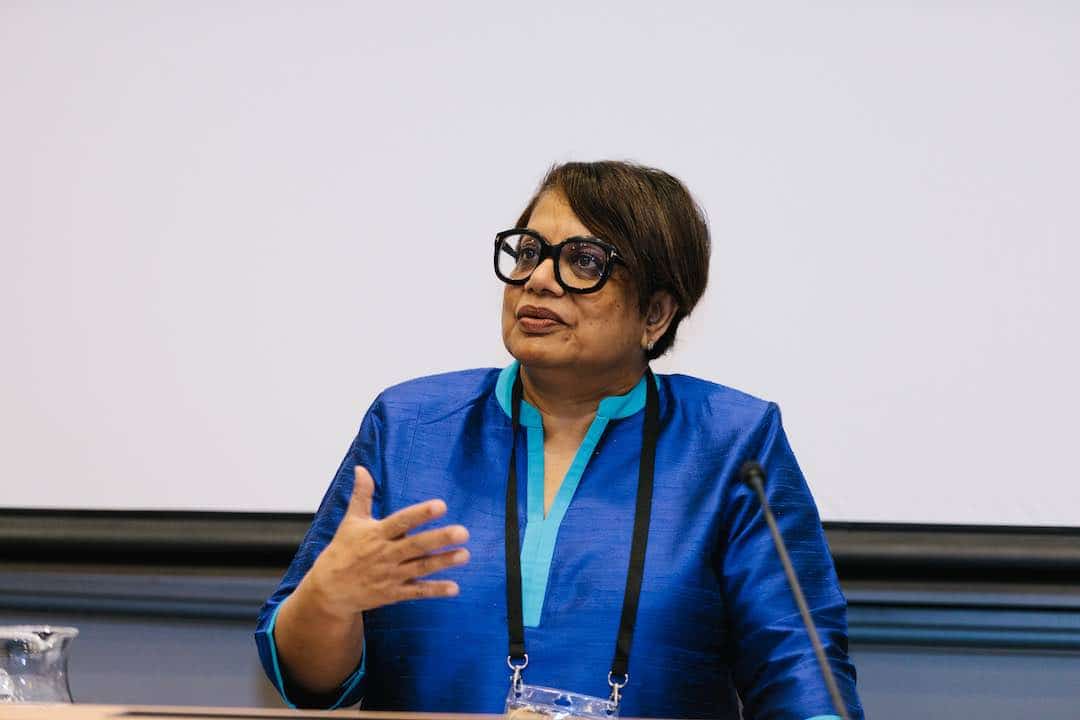 On the 20th anniversary of UN Resolution 1325 to increase women’s participation in peace processes, keynote speaker Radhika Coomaraswamy, a Sri Lankan lawyer, diplomat, and human rights advocate, challenged the Women, Peace, and Security (WPS) community to “get real.” Dr. Coomaraswamy expressed her concern that WPS initiatives in Asia were being driven by norms, principles, and expectations that were too often out of touch with the realities of women’s experience on the ground. An expert panel organized by The Asia Foundation, comprising activists, academics, and practitioners, called for a stronger evidence base and consultation with women’s movements to inform and drive the WPS agenda. They supported a focus on prevention, balancing the need to honor human rights and human security with international standards.

“There are no rules, there are only deals” (Lant Pritchett) 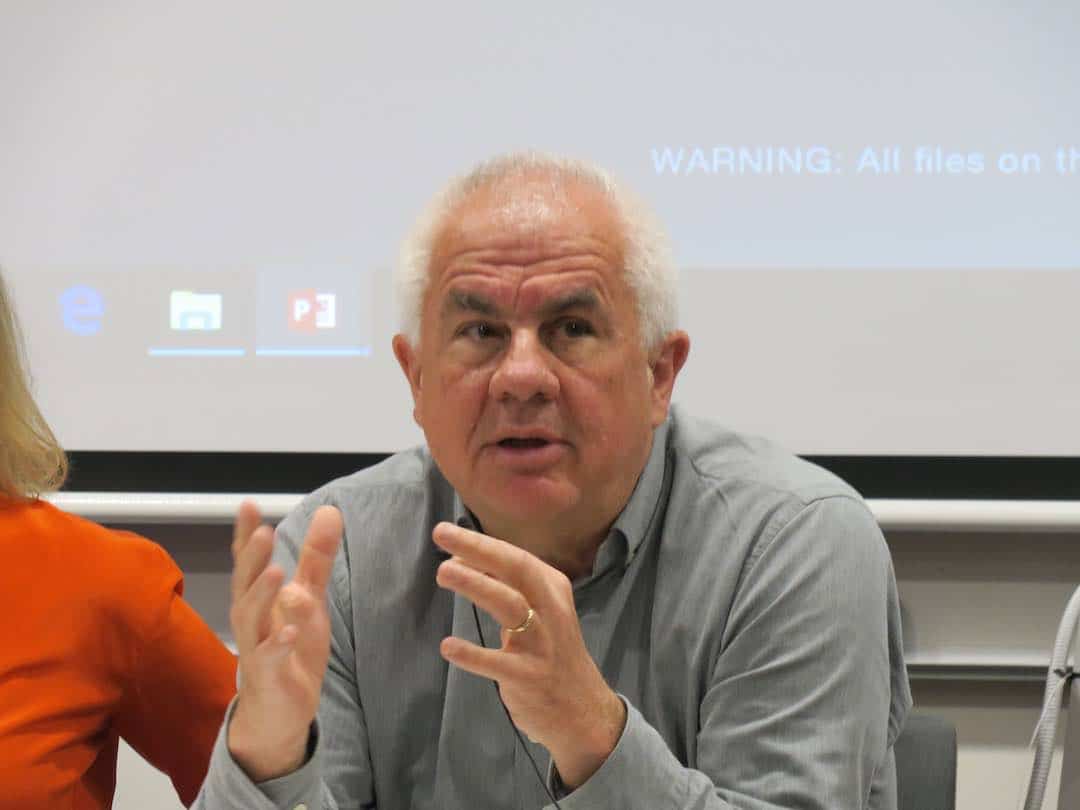 In his keynote presentation, development economist Lant Pritchett challenged an assertion of the World Bank’s Doing Business Index that robust and efficient regulatory environments in developing countries facilitate business. Rather, Pritchett’s research reveals that in low-capability environments, where state capacity is weak, business efficiency is based more on deals struck between companies and the political or bureaucratic arms of the state than on compliance with a set of rules. In fact, stricter laws can often reduce compliance and increase the impetus for informal dealmaking that sidesteps the regulatory regime. He used the example of India, which ranks 63rd on the Doing Business Index, yet where business gets done more efficiently through noncompliance with rules and regulations. Pritchett asserts that closing the gap between dealmaking and compliance starts with identifying circumstances and constraints and understanding the political economy of dealmaking, rather than with efforts to build capacity to follow the rules.

“Aid should be our first choice, not our last resort” (Jonathan Glennie) 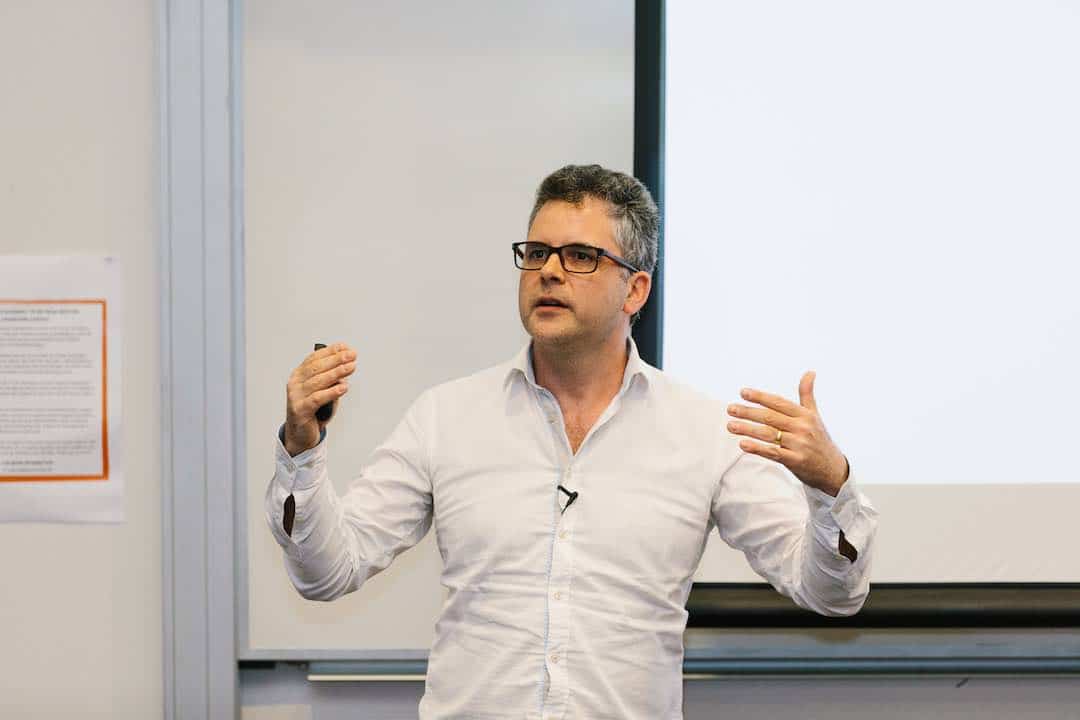 Glennie argues that aid, because of its small size, is too often overlooked, regarded as last-resort finance. Instead, we should recognize its value as a scarce resource that, when used for global public investment, can be more important and pivotal than a plentiful one.

The Pacific as “family” (Alex Hawke) 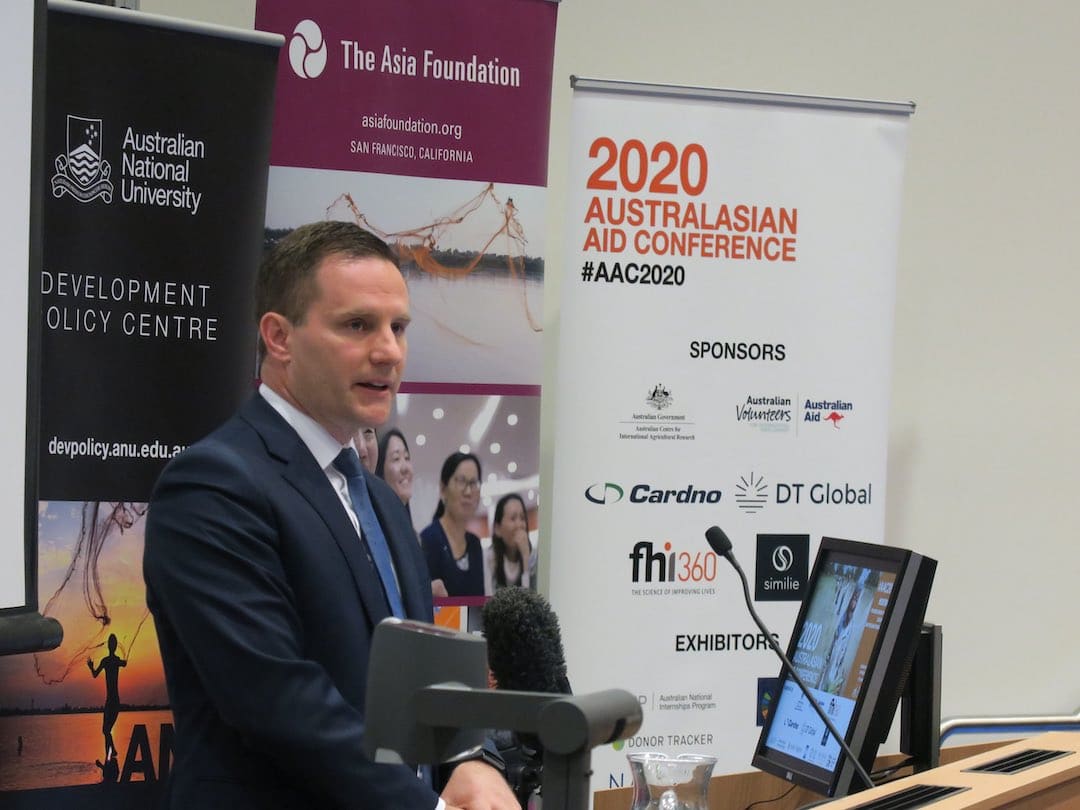 Alex Hawke, Australia’s minister for international development and the Pacific, used this word to describe Australia’s partnership with the Pacific region. The forthcoming changes to the government’s international development policy will be good news for the Pacific family of nations. Under the new policy, the Pacific will benefit from a record AUD 1.4 billion in ODA this year; infrastructure investments from a new AUD 2 billion financing facility, which includes a window for climate finance; improved labor schemes to get more non-ODA finance, such as remittances, flowing to the region; and a whole-of-government (foreign affairs, development, defense, trade, etc.) approach in Australia’s Pacific step-up. But the minister’s priorities stood in contrast to the hard truths delivered in the final plenary, on Australian aid to Papua New Guinea, where panelists, including the PNG high commissioner to Australia, asserted that Australian aid to PNG has never been less influential, has lost focus, and is Australia’s largest yet worst-performing program.

While Minister Hawke was noticeably silent on civil society, raising concerns about the future of Australian support to this sector, The Asia Foundation’s panel “Rethinking Civic Space in Southeast Asia” presented new research revealing that civic space in Southeast Asia is in crisis. Largely due to rising populist intolerance and backsliding on democratic ideals, civic space is shrinking in seven countries in the region. This is characterized by growing restrictions on free speech and funding for civil society organizations, dwindling engagement with government, and fewer opportunities for these organizations to participate in regional or international forums. Additionally, there are significant divisions within civil society over the goals, aims, and tactics of engagement with government in these increasingly authoritarian environments. 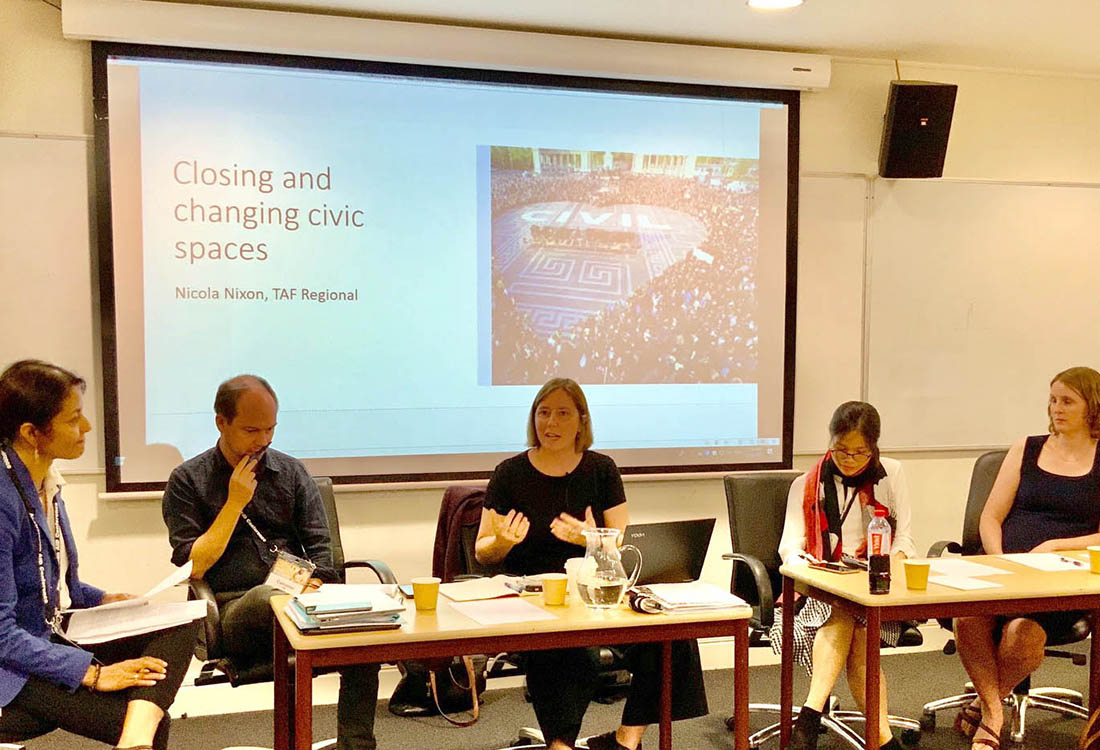 While some spaces are closing, however, others are opening up. Youth are using social media for a range of activities, from student protests in Indonesia, to addressing transport issues in Thailand, to political dialogue at coffee shops in Cambodia. The new study argues for moving beyond the somewhat narrow and value-laden notion of “civil society”—often associated with advocacy NGOs working on democracy at one end of the spectrum, or with faith-based charity organizations at the other—to a new terminology, “civic space,” which is more inclusive and captures a broader range of civic engagement. This reconceptualization may make it possible to more effectively challenge illiberal trends in a “post-factual” environment.

As in previous years, AAC 2020 didn’t disappoint. The debates were never stale, because development is a dynamic field and aid professionals are passionate. Participants left stimulated by new insights, armed with new evidence and narratives, and ever committed to aid as a first choice, not a last resort.