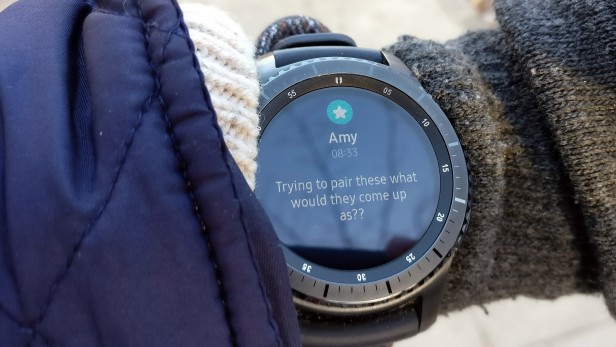 The Gear Sport is Samsung’s next wearable Samsung’s smartwatches come but once a year and guess what folks? That time is rolling around once again.

It seems like only yesterday we were cooing over the Samsung Gear S3 and now it’s all grown up.

Reports on Friday revealed the Korean giant has another baby on the way and the early scans show it’s likely to be a fitness-focused offering.

According to documents filed with the Federal Communications Commission (FCC) in the United States (via Android Headlines), they’ve already decided on a name. It’ll be Christened the Samsung Gear Sport.

The image provided with the filing suggests it’ll be a full blooded smartwatch rather than a fitness tracker. Naturally, it has Wi-Fi and Bluetooth, but that’s about all we know. Given Samsung loves to use Tizen on these devices, we’d say that’s a given too.

Whether Samsung chooses to reveal this device alongside the Galaxy Note 8 on August 23 remains to be seen.

The company might want to save it for the IFA 2017 tech show, which starts the following week.

Last year the company debuted the Gear S3 — admittedly its best yet — during its IFA tech show address.

The company’s smartwatches have struggled to impress thus far. The Gear S3 earned a 6/10 rating from TrustedReviews.

Our reviewer Richard Easton concluded: “The Samsung Gear S3 flirts with greatness, but it ultimately falls short due its gargantuan size and weight, as well as its Tizen OS.”

It has been over a year since Samsung updated the Gear Fit 2 and Gear IconX, so we might see new versions of those trackers too.