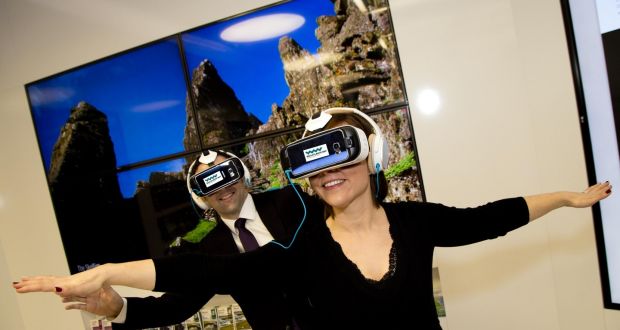 It is one thing telling people about how great the Wild Atlantic Way is, but there’s nothing like seeing it yourself, which is why Fáilte Ireland has introduced a new virtual reality (VR) tour to show people what they are missing.

The tour, which gives viewers a chance to remote experience 3D tours of the popular 2,500km coastal route, made its debut last week at the international tourism fair in Berlin, with buyers and potential visitors getting an opportunity to testdrive it.

Fáilte Ireland says the virtual tour will soon be shared on the Oculus store where millions of users with VR headsets will be able to try it out. The tourism body is also giving consideration to integrating the programme across its office network and offering it to trade and industry partners for their promotional activity.

Podcast: How we will use VR

“Virtual reality is proving to be a game-changer in how experiences are consumed and this technology is set to be the most exciting innovation in travel and tourism marketing during 2016,” says Fáilte Ireland’s director of marketing Noel-John McLoughlin.

“With these virtual tours of the Wild Atlantic Way, we can bring the excitement and thrill of the world’s longest coastal route directly to buyers, consumers and media and allow them to truly sample what Ireland has to offer.”

Those taking part in the tour can experience, among other things, surfing the crest of a wave below the Cliffs of Moher in Co Clare, climbing one of the tallest sea stacks in Europe in the northern headlands of Donegal and horse-riding on a beach in Sligo with Ben Bulben as a backdrop.