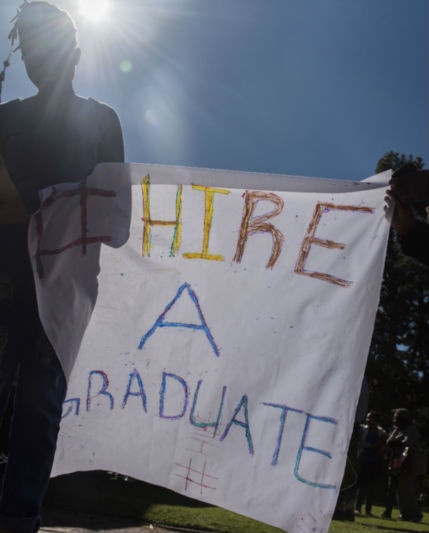 Graduates gather during the Hire a Graduate Day of action march on May 17, 2017 in Tshwane. (Gallo Images)

“The high demand for skilled labour means that those with a post-secondary qualification are far more likely to find employment than those with only a matric certificate,” Community Chest CEO Lorenzo Davids said.

“However, while there are vacancies within the labour market for skilled people, we have to look at creative big ideas in innovative spaces such as coding, water challenges, climate regulation and urbanisation for opportunities to create new ‘big idea’ employment opportunities.”

Young people between 15 and 24 should constitute “that starry-eyed section of a society that’s eager to apply their newly-acquired skills and qualifications, embark on their careers and embrace the future by making their mark”.

“However, if they continue to hit a brick wall, they’re bound to become frustrated, discouraged and halt their job applications. To top this, there’s a real fear that they’ll join a cycle of constant unemployment and poverty. It is in this challenge that we have to find the opportunities to create a new cycle of sustainable job creation.”

Big ideas and not “random piece-meal activities” are necessary to tackle youth unemployment in South Africa – rated the fourth worst performing country in terms of unemployment, the organisation said.

RSA, ranked among the worst along with Spain, Bosnia and Herzegovina, Greece and Macedonia, has a youth unemployment rate at 52.6% according to World Atlas. With 67% of the country’s population said to be younger than 35, it is vital that government, the private sector, and NGOs “begin to talk about big ideas” to tackle unemployment, Community Chest said.

“Moreover, Stats SA’s recently released Quarterly Labour Force Survey Q1: 2017 indicated that approximately 58% of the unemployed in South Africa are younger than 35.  This has pushed up SA’s youth unemployment rate by 1.6%.”

According to the organisation, the country’s overall unemployment rate of 27.7% has increased to its highest in 14 years – with Stats SA finding that the unemployment rate remained high among those with an education level of less than matric at 33.1%.

The unemployment rate among graduates remained at 7.3%.

The organisation annually awards promising pupils from six schools in poorer Cape Town communities with study bursaries worth R100 000 each in mathematics, science, and technology.

The school also receives mathematics and science kits to facilitate learning and improve their performance in these subjects as part of a long-term project.

It also assists supports and mentors the bursary recipients while they study.

Economic recession, racial and gender inequalities, and imbalanced access to the labour market are cited for the grim youth unemployment rate. Education was cited as a key solution to the issue.