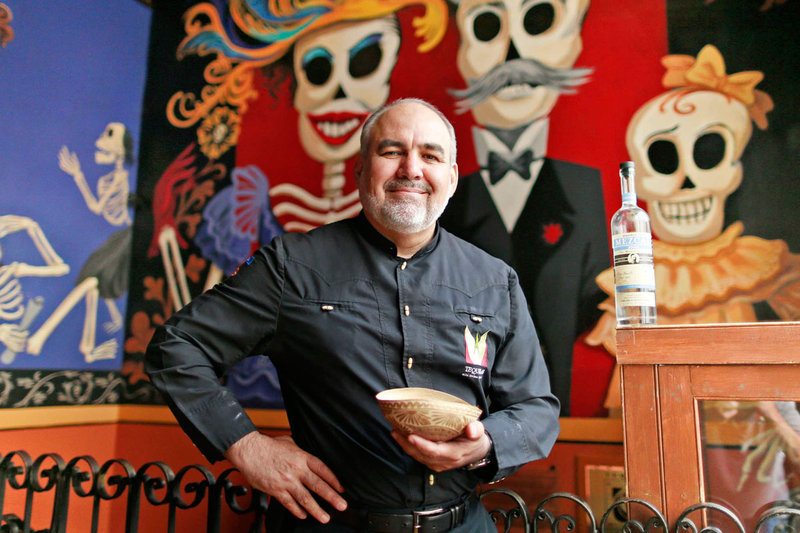 Camera icon DAVID SWANSON / STAFF PHOTOGRAPHER
David Suro-Piñera, owner of Tequila’s, uses this traditional gourd cup to drink mescal. His company, Siembra Azul, featuring highlands tequila, recently expanded into mescal
by Craig LaBan, RESTAURANT CRITIC
For most of the 30 years since David Suro-Piñera opened Tequila’s, his elegant ode to authentic Mexican cuisine and drink on Locust Street, he’s only had eyes for one kind of agave spirit: tequila. That’s no surprise, considering the restaurant’s name, his epic bottle collection, and Siembra Azul, the company featuring highlands tequila he launched 11 years ago. But with Siembra’s recent expansion into the world of mescal, plus a new line of tequilas featuring lowlands terroir (Siembra Valles), Suro-Piñera’s mission to preach the joys of agave liquor has grown more fascinating than ever. He took a moment between work trips to pause for a few sips, a grasshopper taco (his favorite), and a long chat about the evolution of his industry – and the challenges facing Philadelphia’s rapidly growing Mexican community.

You always talk about “terroir” with tequila. What’s the difference between tequila from the highlands and lowlands?

[Tequila production] crosses the Sierra Madre mountain range in Jalisco and goes from sea level to 8,000 feet above. With so many microclimates and diverse ecosystem biodiversity, the flavors you obtain in agave spirits are unique and endless. In the highlands, there is a cool, dry climate with soil that is rich in iron, so agaves live longer and develop more sugar content with unique flavors that are commonly floral, herbaceous with citrus notes. In the lowlands, there are warmer climates and more humidity, and the agaves complete their cycle in a shorter period of time. With volcanic soil, they form a lot of peppery, salty minerality and a little bit of a spiciness.

Mescal, tequila’s rustic cousin, has been hot for several years now. Why did it take you so long to get involved in that category?

Since day one, I’ve always recognized mescal as being the foundation – culturally and historically – of a distilling tradition that dates back possibly 3,500 years in the Mesoamerican region. At one point, tequila was mescal. But the category is getting quickly saturated, so I wanted to focus on some very unique mescales. Most are coming from Oaxaca, but the Michoacán region is the newest addition [of officially recognized points of origin], even though it has always been prolific in mescal production. And the flavor profiles we have in Michoacán have never been exposed to the States. They grow in a pine forest, and all the agaves we use have a unique character – a very piney, sappy profile and a lighter smokiness, even though they use also lava rock pits for cooking. Our mescales use very old processes – the still’s condensing pipes are made out of oyamel and pinewood – so we have a spirit that is connected with centuries of history.

Speaking of history, you’ve seen the Philadelphia region’s Mexican population grow from almost nothing to a couple hundred thousand since you arrived. What was the Mexican restaurant scene like here in 1985?
I was married at that time to a lady from Philadelphia. Love brought me here. But the Mexican scene? It was pretty much zero. Mostly Tex-Mex. I had to go all the way to Chicago to select my ingredients and ask a guy back in Avondale to bring them in. Even cilantro was difficult to get back in the ’80s.

Our Mexican culture is so rich now, especially in South Philly. Do you have any favorite taquerias?

I love Tamalex (1163 S. Seventh St.) for the caldo de res and menudo. They execute it just like a grandma would do it back in Puebla. I also really like Barbacoa South Philly (1703 S. 11th St.), where I like their barbacoa consommé a lot, and the way they season and bake the [lamb] barbacoa is just perfect, a very honest expression of the Toluca region. But I also like [the modern interpretations of] what Jose Garces did at Distrito, and the guys at El Vez, Coyote Crossing, La Calaca Feliz, and Carlos Molina at Las Bugambilias, my former chef. He didn’t know how to hold a knife when he first walked into my restaurant, but now he has such a beautiful restaurant on South Street – it cannot get any better than that.

Considering such progress, and the many opportunities for Mexican immigrants in Philadelphia kitchens, what are your thoughts on the recent focus on illegal immigration and undocumented workers losing their jobs due to background checks?

If it wasn’t for the thousands of families that immigrated to Philadelphia from Puebla, we would not have such a prosperous and vibrant restaurant industry. It makes absolutely no sense to deny the role that our community plays in [that]. For too long, we have blamed all that is negative on a very vulnerable sector of people who are typically the hardest workers at the entry level of our society. But it is a political decision. And I totally disagree with the lack of political willingness to find humane solutions. There can be many different ways to do that, from temporary visas to amnesty. But there at least has to be a debate.