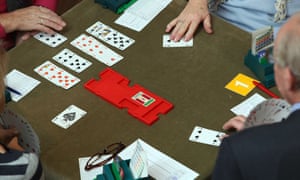 The world No 1 bridge player has been suspended after failing a drugs test.

Geir Helgemo, who is Norwegian but represents Monaco in bridge events, tested positive for synthetic testosterone and the female fertility drug clomifene at a World Bridge Series event in Orlando in September.

After accepting he had breached anti-doping rules, Helgemo was suspended by the World Bridge Federation (WBF) until 20 November. He also had all titles, medals and points from the 2018 World Bridge Series revoked.

Kari-Anne Opsal, president of the Norwegian Bridge Federation, said the drugs were “not performance enhancing”. In a statement on the federation’s website, she said: “Geir Helgemo … has previously played for the Norwegian national team and is our biggest star. Many within the bridge community know Geir and respect him.

“It is his responsibility not to take substances that are on the doping list, even though in this instance they are not performance enhancing in bridge. I feel for Geir in this situation and hope he will come back stronger after his ban ends.”

The World Bridge Federation (WBF) is recognised by the International Olympic Committee and as such abides by World Anti-Doping Agency rules.