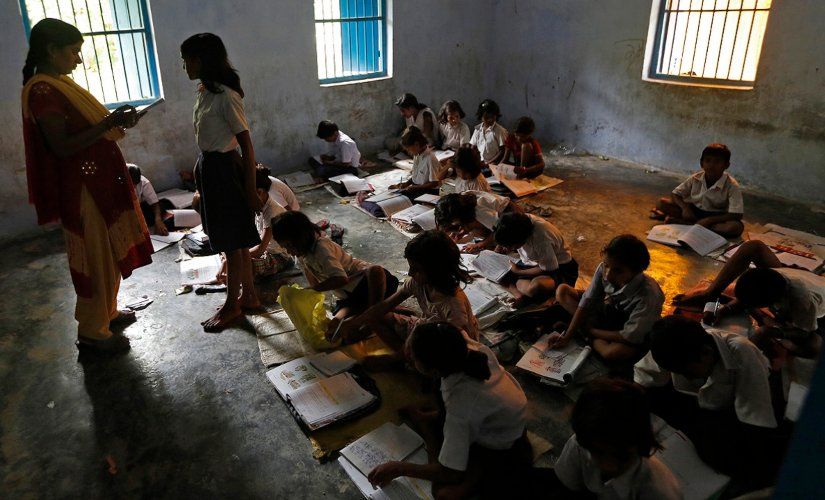 India’s education system, arrested by inequality and loopholes in policy, sets poor children up for failure

Editor’s note: As India heads into the 2020s, there’s reason to believe we are heading into a new age of anxiety. Economic growth has been crippled; many economists argue recovery will take years of painful reform. Ethnic and religious tensions have sharpened. Even India’s core Constitutional values and institutions, many commentators have argued, are besieged.

In this series, Firstpost examines what the 2020s will mean for India: for everything from politics and the economy, to our culture and communities.

From mid-September to mid-October in 2019, tens of school teachers were absent from government high schools in New Delhi — teachers who taught Math, Science, Hindi, Social Studies, Sanskrit and English, including to those all-important ‘board exam classes’. The teachers had been called up, on the orders of the Election Commission, for ‘full-time election duty’ to update Delhi’s state electoral rolls. As many as 10-12 teachers were absent from a single school. Their students just had to make do.

In the month that the students in Delhi’s government schools — many of whom work before or after school as cleaners, shop assistants or family labour — sat teacher-less, their contemporaries in the city’s many well-resourced private schools would have been supplementing their regular uninterrupted school lessons with private tuition to help prepare them for school exams and for future competitive university entrance tests.

In February and March, all these young people from the government schools and most of its private schools will sit the exact same board exams.

The absence of these teachers barely got noticed. But the results of the board exams will garner wall-to-wall media coverage of sky-high grades, photos and gushing interviews with exam “toppers” about their prep secrets and their professional dreams – which don’t usually include nuclear physicist, epidemiologist, sociologist or even economist, and definitely not writer, actor, comedian or artist.

The Board exam is widely accepted as the ultimate test of merit in India. It allows the intergenerationally privileged middle class the false comfort of feeling that they have what they have because of “merit”. By the same token it leaves a very large population of the young (very many with no guarantee even of teachers in their classrooms) with the feeling of failure, of lacking “merit”, of not being good enough and having to make do with second- or third- or even fourth-best options. It’s a cruel system. It creates the illusion of a possibility and assiduously protects privilege. Asking questions complicates the national narrative about the liberating power of education, and it forces the middle class to check its own privilege. Representational image/Reuters

Only a little over 50 percent of children enrolled in school in India make it to Class 12. Less than half of them enter higher education. And by and large only those who can afford expensive ‘private coaching’ advance through that other ‘merit-based’ system – the entrance tests to the coveted engineering and medical colleges.

It is so unusual for someone from a poor family to get through the JEE and NEET exams that when they do, it makes headlines.

But a whole poorly regulated private higher education industry was created by monetising the aspirations of the young and hopeful, in the short-lived IT and engineering boom. Colleges talked up the success of the few as a possibility for the many. In the last few years young people, particularly with engineering qualifications, have been derided as “unemployable”, apparently lacking the technical knowledge and soft skills, including English comprehension, needed in the industry. In truth, even if they had these skills, there are no jobs. And the fact remains that the higher education business that profited from young people’s dreams sold their students short.

Education has been sold in India as a route to national greatness. It is expected to “socially uplift” the poor, transform society and turn the country into an economic powerhouse. But in countries like ours where intergenerational social and economic inequalities are entrenched, education on its own changes very little. It mostly reproduces the inequalities.

The Right to Education Act 2009, celebrated as a revolutionary law – because it gives children the legal right to elementary education – was unable to give an equal right to all children. The right to go to school is quite meaningless if the school the child has access to continues to disadvantage the child. Those who drafted the law made a choice between the rights of poor children to a full-time teacher and the right of the State to use its teachers as contingency clerks. Instead of making it illegal to call up teachers in government schools for non-academic work outside their schools, the law actually allows it in some circumstances. The teachers were absent from the Delhi government schools in September and October this year because the law, and law as interpreted by the courts, says it is acceptable. So even the law that was enacted to give the right to all children in reality gives a child whose parents cannot pay for the privilege of private schooling a truncated/edited/conditional right.

These children enter the public discussion on education about once a year, through a media blitzkrieg to promote the NGO Pratham’s annual poor learning outcomes survey. Every year the survey finds, what it has found for the last decade or more, that between 25-30 percent of children in most states can’t read a sentence in a Class 2 book and can’t do two-digit subtraction. It says nothing about the children, whether they attend school regularly and if not why not; if anyone has ever read to them, if they have a library they can use, if their teacher has been out on census or election or disaster relief duty, or if their teacher is just not a good teacher or an interested one.

No one asks questions about these things, just as no one asks why teachers were absent from Delhi schools for a whole month. Asking questions complicates the national narrative about the liberating power of education, and it forces the middle class to check its own privilege.

It is only affirmative action that has, to an extent, downed some barriers. But affirmative action on its own takes a very long time – several generations even – to make a dent in entrenched privilege. Such unchecked privilege was on display during JNU’s anti-fee hike strike, when the old middle class questioned and mocked students, the majority of whose families earn around Rs 1.4 lakh a year, which is less than what many of them pay as school fees for one child at a private school in Delhi.

India’s education system offers an education in failure. And the feeling of failure weighs a society down.