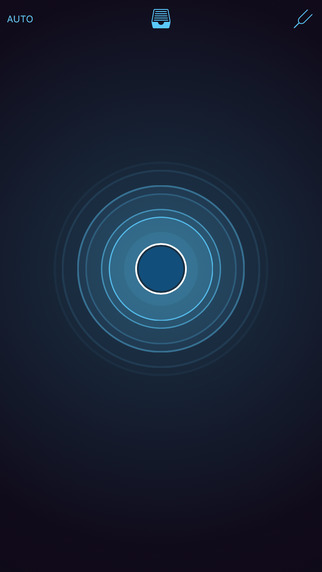 Over the past few years Apple has really marketed its iPhone as a creative tool, highlighting how the device is used by photographers, videographers and musicians. It’s the latter of which Apple has created a new app for, endearing the iPhone as the go-to device for singers and artists.

The new app is called Music Memos, and it’s essentially Voice Memos imbued with some Garage Band powers. It’s designed to be quick and easy, allowing anyone—anyone!—with an iPhone to make sweet, sweet music. Music Memos is akin to someone making demos in their basement on tape.

The interface is pretty straightforward, presenting users with a big red record button. Hit that, strum some tunes, and you’re on your way to recording a Top 100; the app also features an “auto” mode, which will record whenever it hears music, and stop when you stop. When you’re recording, the app will show a waveform toward the bottom of the interface, indicating that Memos hears what you’re doing.

After you record your next jam, Memos will transition to an editing screen, where users can add stuff like bass or drums. The app will dynamically match the beat of whatever it is you recorded, which means you won’t have to record the different parts separately. It’s super simple, and will allow users to get their music recorded and put onto the Internet in a matter of minutes.

Of course, if you want to add a little more production, you can import your Music Memos recordings over to Garage Band, which also received a host of updates today. If you’ve used Voice Memos before, Music Memos is pretty similar, catering to musicians who want to do quick and dirty recordings when inspiration strikes. There’s even a built-in guitar tuner.

Music Memos is out beginning today, and is available for free.

APPS 965 Apple’s Music Memos 1 for iPhone is a new 1 recorder app for musicians 1
Newer Post
Pay what you want for the Complete 2016 Coder Course Bundle
Older Post
Get one year of Pixlr Pro and SketchBook Pro for $19.99